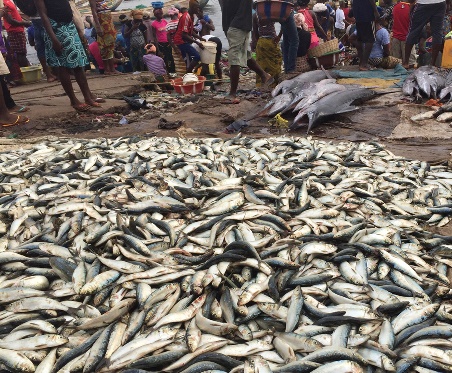 According to a recent EU report, the government of Sierra Leone is seriously failing to provide necessary surveillance and monitoring of the country’s coastal waters, to prevent illegal fishing and other criminal activities.

Dozens of mostly large Chinese and Korean fishing trawlers are plying the coasts of Sierra Leone, regarded as one of the most fertile grounds for fishing in the world. But the people of Sierra Leone are constantly complaining of serious fish shortages in the local markets.

The government of Sierra Leone is allowing most of the catch to be taken abroad for overseas consumption, with little or no tax and fees paid by foreign trawlers.

There are allegations of corruption and bribery by government officials, who are either deliberately failing to uphold the country’s fishing regulations, or are receiving payments in return for granting fishing permissions, under the gaze of senior police officers involved in the rackets.

It is not clear what exactly sparked the exchange of gunfire between the Guinean and Sierra Leonean armed officers, but Reuters says that Sierra Leone was holding up to eleven Guineans, including military personnel in custody on Wednesday following a confrontation at sea.

It says officials confirmed that the incident occurred early on Monday morning off the coast of northern Sierra Leone near the countries’ border.

Al Shek said the Guineans had been holding the vessel’s crew at gunpoint demanding money, but the Guineans rejected that version of events.

He said the Guinean personnel had disembarked to carry out administrative formalities and would return home soon.

“There was no gunfire or arrests,” Camara said.

According to the Reuters reports, West Africa, home to some of the world’s richest fishing waters, loses up to $1.5 billion worth of fish each year to vessels fishing in protected zones or without proper equipment or licenses.

Under-equipped West African maritime forces are struggling to clamp down on illegal foreign vessels, many of them Chinese.