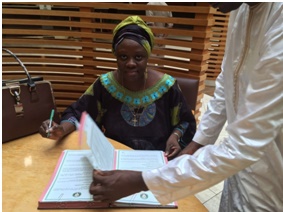 Some children in the network late December 2016 were alleged to have been beaten and forcefully removed from the premises of the Social Welfare Ministry by officials.

The Minister has finally responded to this allegation in a meeting. The meeting was witnessed by children representatives from across Sierra Leone, child rights coalitions and the Sierra Leone police.

The Minister confirmed that she gave the directives to physically apprehend the aforementioned children and marched them to New England Ville Police Station, owing to the fact that some of the children promised to forcibly take over her ministry’s conference room and personally attacked her.