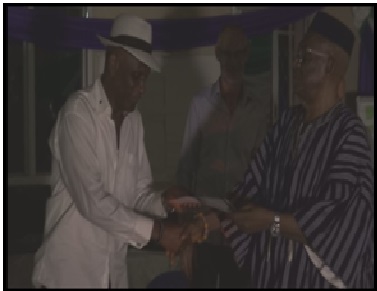 The training focused on several filming disciplines including screen writing, story-telling skills. It taught about media for peace, how to make progress and social change, operating cameras, shooting and editing of images.

The organizers said this development would help beneficiaries tell their own stories.

Speaking at the certification ceremony, the chief trainer who doubles as Chairman of the Welt film.org in Germany, Alexander Pfeuffer said, the project which they have initiated all over the world in which locals tell their own story has been overwhelming.

He noted key amongst the need for organising such training was as a result of lots of stories that are being left untold by the Ebola crisis; which has ravaged the lives of over four thousand persons, with some still going through trauma.

“I am very much pleased with the passion and commitment showed by these participants”, he said, and called on the newly-certified persons to put into practice what they learnt at the training, so that the impact would be felt in their communities.

Station Manager at Culture Radio, Aminata Finda Massaquoi said the training would provide the capacity needed by the beneficiaries in the production of films that would benefit them in the future.

Madam Masssaquoi explained that the selection of the participants was not announced to the public; but rather they contacted already attached film makers and also those aspiring to become actors and actress, and their names were sent to Germany for vetting by their sponsors who finally selected the twenty-four names.

She however noted that these films are been done to put some of the stories of Sierra Leoneans into fictional stories which would explain the situation of Sierra Leone abroad.

Participants are expected to do eight movies regarding subjects that have made impact on their lives; using their experience from the training. The result is expected to be released through a mobile cinema.

Several participants expressed appreciation of the training with most of them now considering themselves not only as actors, but film makers and producers.