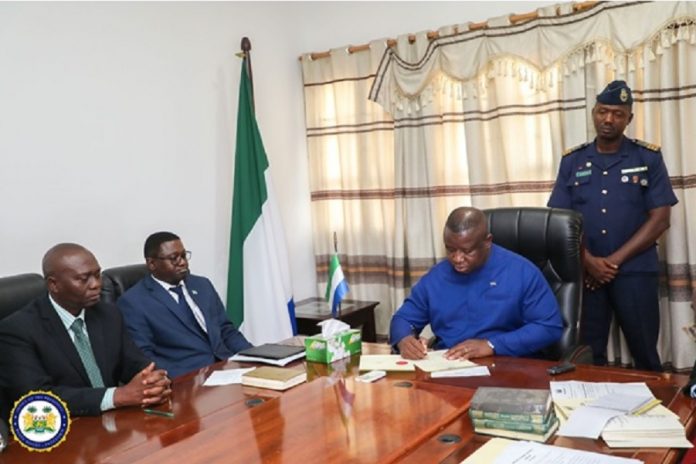 Newly approved Deputy Ministers of Finance and Health and Sanitation and Commissioners of the Local Government Service Commission have subscribed to the Oath of Office before His Excellency President Dr Julius Maada Bio during a short ceremony in Freetown.

The commission was established in 2004 with the responsibility of providing regulatory, performance management and management functions to the system of decentralised government as provided for in section 38 (1) of the Local Government Act of 2004.

In his statement, President Bio congratulated the new officials, saying that they were meticulously chosen because they would bring value to the state. He said the task ahead was an extremely difficult one and noted that his government had done quite a lot to correct the wrongs of the past. He stated that his government was committed to delivering for the people and urged them to make the necessary sacrifice.

Deputy Finance Minister II said that they were thankful to God for His divine hand in the leadership of President Bio and for making their appointments possible. He noted that the government had focused, in the last twenty months, on designing the roadmap for implementation of strategic pieces of President Bio’s vision, which were now solidly in place.

Mr Bangura assured that they would unreservedly commit to deploying and exerting to the fullest, their capabilities, experience, networks and unrelenting efforts to foster through teamwork to ensure effective delivery of the President’s vision as espoused in the New Direction Agenda and the National Development Plan.

On their part, the new Chairman, Local Government Service Commission expressed sincere appreciation to the President for appointing them to serve in his government. He said that the Local Government was key to the delivery of services in the nation and assured that they were determined to serve the country with loyalty and commitment.