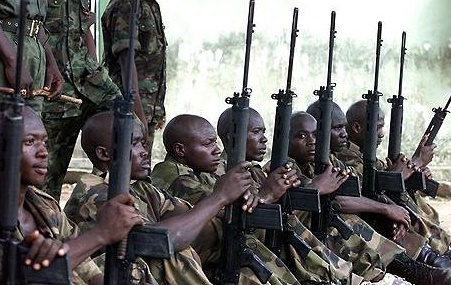 He made this statement on Tuesday 29th March 2016 during the opening ceremony of the Junior Staff Course 2016 held at the Horton Academy Leicester Square in Freetown.

Major General Milton emphasized that  the rationale for integrating the IPAM package into the Junior Staff Course is  to improve  the professionalism  and capacity  of junior staff to work both inside and outside the Military circle adding that a pass in the Junior Staff Course is a prerequisite for promotion and therefore urged all students to take the course seriously.

the General disclosed that the Ministry of Defense would provide all necessary supports to ensure the smooth running of the course and promise that during his tenure of office he would put training at the apex  of his administration.

Chief Instructor, Lieutenant Colonel Mohamed M. Kposowa reiterate the rationale   of the course  to prepare junior ranking officers to hold staff appointments at their level both at home and abroad highlighting that the course load comprises of forty students,  thirty from the Republic of Sierra Leone Arm Forces and five from the Gambia Armed Forces.

The Chief Instructor further that the course would run for sixteen weeks with two phases, phase one will base on management and administration which would be conducted by IPAM and phase two would base purely on military skills.

Duncan Hill head of     ISAT said as a training institution they want to see the RSLAF take full ownership of the Horton Academy and promise ISAT support to make the academy meet international standard.