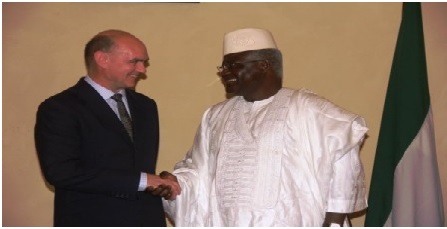 Guy Warrington started his career in international diplomacy in 1986 with the FCO and has sailed through the corridors of the UN, where in 1992 to 1993 he served as the British government’s Second Secretary at the UK Mission to the United Nations in New York.

The British government says that it is working “closely with the Sierra Leonean government to support its efforts to build an effective, democratic and capable nation that is making progress in reducing poverty.”

Guy Warrington is the man at the British High Commission in Freetown who will drive forward the British government’s mission in the country, bringing his unique blend of expertise and experience gained at the United Nations, to help consolidate Sierra Leone’s democratic gains and peacebuilding process.