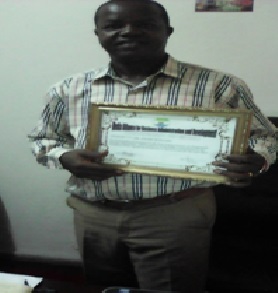 Speaking to this medium, Mr. Bangura thanked the Alliance for acknowledging his work throughout the years; he said he feel honoured to be singled out by the media alliance among others.

Mr. Bangura said NACSA is a nongovernmental organization and semi- autonomous body set up by government to alleviate poverty in collaboration with international partners such as the World Bank, IDB and the ADB. He pointed out that they also partnering with some local organizations like the NPA’s so they can team up together to provide services for the vulnerable and war affected communities.

Mr. Bangura told this medium that his job has been a challenging one but very productive because he engages the victims especially the war victims and war affected communities.

He further said that he ensure that those victims build up their lives independently. Mr. Bangura maintained that the whole reparation programme started in 2008, and them as an institution happened to register over 33,000 (thirty three thousand) war victims throughout the country.

Mr. Bangura further said that he hails for Mambolo in the northern province of Sierra Leone and started school at Mambolo up to the 5th form and later got his O’level and entered Fourah Bay College in the 1980s and got BA Second division and later went to England to do  his post graduate diploma in programme management.

He reiterated that he engages in some local courses both in IPAM and Njala University respectively, all of which has to do with programme management.

He further said that he was privileged to own a local company name Thamsella Farmers Association.

The Reparation Manager told this medium that he has served NACSA for a little over eight years and it has been very challenging but due to the hard work and dedicated staff he has with him they have managed to make progress.

He claimed because of his dedication and trust he was promoted as programme manager for the reparation programme, NACSA, in 2007 and up to date he has served in that capacity.

He added that in the year 2016 he is looking forward for another promotion.