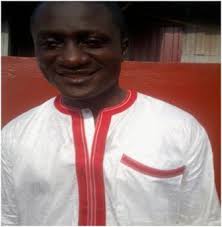 Speaking at the occasion, Hon. Francis Kowa stated that the development of various communities in his constituency has always been his cardinal objective and will continue in that direction.

He said that residents in Kroobay have been yearning for such development in their community, and that his decision to assist the Kroobay Development Organization with the sum of thirty one million leones that is spearheading the construction work was not only deliberate, but also part of his party development agenda.

Hon Kowa further noted that residents of Kroobay have and continue to show loyalty to the All Peoples Congress and it is payback time as the bridge is expected to link Kroobay and Charcradi corner communities.

According to him, he has been actively engaged in various development programmes, not only at Kroobay, but also in communities within his constituency, noting that the bridge project is timely and will go a long way in salvaging Kroobay community.

He went on to state that he is also on record for awarding scholarships to deserving pupils at Kroobay and other communities, and that he is poised to award more scholarships to pupils as a way of contributing to the development of education in his constituency.

Members of the Kroobay Development Organization, youth groups, community leaders, and elders expressed immense signs of appreciation for the bridge project and further implored Hon. Francis Kowa to assist them in the overall development and progress of their community.