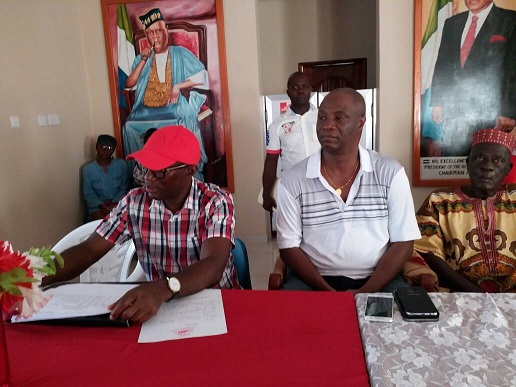 At the event, Chairman Konte urged every eligible voter who had registered for the March 2018 elections to go out in their numbers to collect their Voter ID Cards which scheduled to commence distribution on 25th November and expected to end 4th December 2017.

He reminded all about the remarkable developments made so far in the district by the APC-led government and encouraged all that if they want to continue enjoying more and more of these goodies, they should go out on polls day and vote massively for the APC.

Supporting Mr. Konte’s statement, Chairman of Falaba district, Foday B.L Mansaray who doubles as Minister of State in the Ministry of Finance and Economic Development underlined the need for both Koinadugu and Falaba districts to come and work together to ensure that the APC gets nothing less than 90% in each of the two districts.

“We are one and we must continue to work as one in the district. We should all go out now and collect our voter ID cards and subsequently go out in our numbers to vote for the APC come 2018.’’ FBL Mansaray stated, adding that Koinadugu and Falaba will always remain APC and that come 2018, they will jointly vote Tolongbo.

He therefore urged every member of the districts and all other districts across the country to go out in their numbers to collect their Voter ID Cards when they start the distribution on 25th November.

Also gracing the event was the APC Regional Organizing Secretary North, Hon. Akmed Femi Mansaray who joined the two Koinadugu gentlemen who spoke earlier to assure all that the Northern region will definitely give the APC over 90% votes come 2018. He further assured that they will approach the coming election as an opposition with robust campaign strategy to win the election on a first ballot.