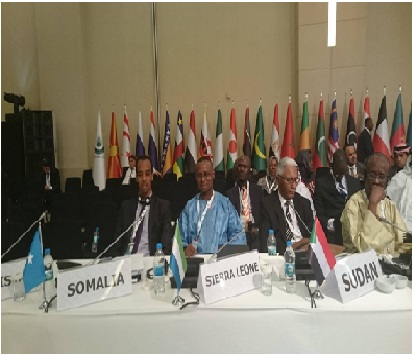 Turkish President, Recep Tayyip Erdogan who also doubles as Chairman of COMCEC, OIC Secretary General, Iyad Ameen Madani were amongst some of the world dignitaries that attended the inauguration of the conference.

During the five day conference, Alie Bah held bilateral talks with several heads of delegation on the sidelines of the Ministerial Meeting where they discussed issues of mutual interest and exchanged their views regarding the possibilities to further deepen economic co-operation between Sierra Leone and their respective countries. The COMCEC is one of the standing committees of OIC to foster cooperation in development.

In another engagement, the Minister and delegation also met with the Sierra Leone community in Istanbul, majority of them students.  Addressing them in the presence of Mr. Aziz Ihsanoglu, Sierra Leone’s Honorary Consul in Istanbul, the minister conveyed His Excellency, President Dr. Ernest Bai Koroma’s fatherly greetings to all Sierra Leone nationals in Turkey.

The Minister encouraged them to think of going back home after completion of their studies and join hands with the Government in the drive to rapidly transform the country. He added that he recognizes the tremendous contributions, especially remittances they are making to friends and families back home which he said, is going a long way towards the economic development of the country.

He also informed them about his Government’s achievements in the areas of agriculture, health, education, infrastructure, among many other achievements.

He also informed them that the President’s Agenda for prosperity, which was aimed at consolidating the gains that were made under the Agenda for Change, was suddenly interrupted by the Ebola outbreak in May last year which had devastating effects on lives and the national economy.

He, however, assured that the country will soon recover from the damage done to its economy during the Ebola outbreak. For this to happen, the minister appealed to them to assist Government towards the Post-Ebola Socio-Economic Recovery plan aimed at kick-starting the Agenda for Prosperity whose development package would make life meaningful to all Sierra Leoneans in terms of poverty alleviation.

He also assured that since the country has now been declared Ebola free, the Government will redirect most of the country’s resources towards national development in tendon with the consolidation of the gains already made under the Agenda for Change.

In conclusion, Mr. Bah also informed them that  Statistics Sierra Leone has expressed strong determination to conduct the 2015 Population and Housing Census scheduled to take place between the 5th and 18th December, 2015.

On their part, a Spokesman for the Sierra Leoneans, Victor Kamara, a student at the prestigious Marmara University and President of the African Students Association in Istanbul, expressed appreciation to the Minister and team on behalf of his compatriots for taking time off their busy schedule to address them on issues of national interest in their country.

He said President Koroma was overwhelmingly re-elected at the last Presidential elections because of his very good track record and the sincerity Sierra Leoneans saw in him to deliver. He encouraged his compatriots living in Turkey and the Diaspora to go beyond politics and support the President’s vision of developing the country.

He also showered praises on the President for his visionary leadership which has brought great hopes to Sierra Leoneans in the Diaspora. He added that the President’s vision since he assumed office in 2007 has been focused on building a healthy nation, setting the relevant structures for building on the energy sector, health, education, agriculture, transportation and infrastructure development.