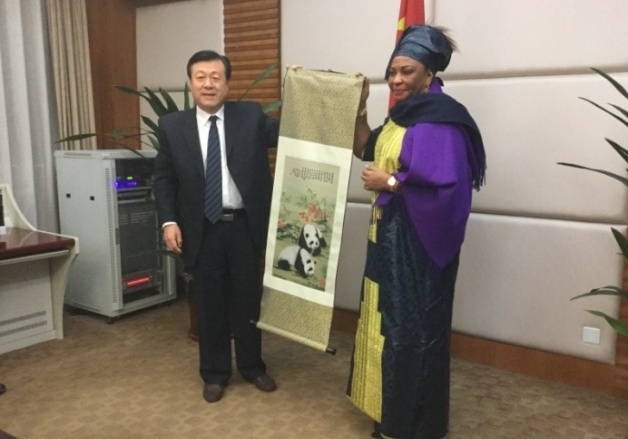 In his Welcome address, the Deputy Minister of Agriculture in charge of Fisheries, Yu Kangzhan recalled that China and Sierra Leone have established bilateral relationship since 1971, noting that China is an important trade partner with Sierra Leone. He expressed confidence that the existing bilateral cooperation in Agriculture and Fisheries between the two countries can be strengthened. He recalled the recent meeting of President Ernest Bai Koroma with his Chinese counterpart where they requested for further cooperation, adding that the visits of President Koroma and Sierra Leones’ Minister of Fisheries were demonstration of their wish and interest in solidifying the diplomatic relations between both countries.  He emphasized the importance of the meeting and expressed their willingness to render support in line with the delegation’s vision.  Following the introduction of the Sierra Leone’s delegation to the their Chinese counterparts by Sierra Leone’s Deputy Ambassador to China, Her Excellency Deputy Ambassador Hon. Kumba A. Momoh, the Minister of Fisheries, Elizabeth Mans expressed  appreciation for the warm welcome and reception accorded them by the Deputy Minister of Agriculture and other staff members. She noted that when China embarked on long distance fishing, about thirty years ago, Sierra Leone was the first country the Chinese fishing vessels were sent to.  She informed the meeting that currently about seventy five (75%) of the vessels fishing in Sierra Leone territorial waters are from China, thereby investing millions of dollars and creating lots of jobs opportunities for citizens of the two countries. She however expressed the need for  more  to be done to further strengthen  cooperation in the areas of Aquaculture, Construction of Fishing Harbour and Dry Dock Facility, Establishment of Cold Rooms, Support to Fisheries Monitoring, Control and Surveillance, Stock Assessment and Capacity building for staff and fish farmers.

Madam Mans catalogued various forms of supports rendered to Sierra Leone so far by China including the production of rice, construction of bridges roads, hospitals, stadiums, capacity building as well as support to the fight against Ebola. She advocated for the training of women, most of whom she referred to as bread winners of their families in the fisheries activities. Madam Mans acknowledged the existing ‘mutual and respectful’ relationship between China and Sierra Leone and assured them of government’s desire to work with them. To avoid the practice of exporting fish caught in Sierra Leone’s waters to other countries for processing, she appealed for investments in onshore related facilities such as processing facilities for value addition, canning, filleting, and smoking. She lauded the Chinese authorities for setting criteria that should be fulfilled by potential investors and assured of maximum protection for Chinese fleets whilst in Sierra Leone’s territorial  waters as long as they operate within the ambit the  law.  “Shifting from offshore to onshore, will contribute greatly in helping women who play key role after the fish has been caught” she opined.

In his response, the Deputy Minister of Agriculture, P.R.C. Yu Zhong Zhang raised concerns about some International groups accusing Chinese vessels of Illegal, Unreported and Unregulated (IUU) fishing activities and admonished the delegation not to be bothered by such reports.  Despite concerns raised by some International stakeholders about China’s activities regarding Illegal, Unreported and Unregulated Fishing, he said over three decades ago, China has developed long distant water vessels which have advanced well over time with improved catching methods.  He informed the meeting that even though China has a very large population consuming fish, an appreciable quantity of fish is also sold to the European and other International markets.

He spoke about measures they have introduced to address challenges facing their fisheries sector, including the suspension of current fishing protocols/procedures and the development of better regulatory framework.

He  assured the Sierra Leone delegation  that Sierra Leone’s domestic effort to put  control measures in its fisheries sector will not affect the cooperation between the two countries as the new framework will consider factors such as capacity of investors to implement their projects effectively, abide by laws and regulations as well as best practices at national and international levels, adding that they will also ensure host countries establish official cooperation with China in fisheries through which huge investment will be guaranteed. He therefore called for the signing of Memorandum of Understanding (MOU) as soon as possible to enhance further cooperation, citing the construction of a harbour in Sierra Leone as one of the projects to be implemented. He also advised that issues raised by Sierra Leone’s Minister of Fisheries, regarding women be included in the Memorandum of Understanding.