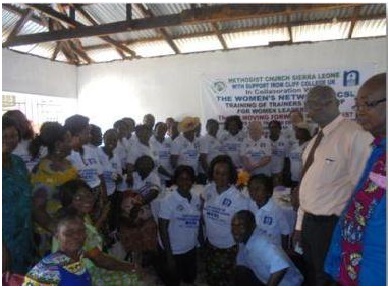 Officially declaring the workshop open, the Secretary of MCSL, Reverend Ronald Bob-Williams underscored that womanhood would move the church forward and appealed to participants to replicate the knowledge gained to others for a better church and further called for commitment, assessment and review, adding that MCSL has benefited from several trainings from Cliff College and that MCSL is a women’s church.

Mrs. Maude Regina Peacock, Chairperson, Women’s Work Council, MCSL, who chaired the event, disclosed that the topics to be discussed during the five-day session include the characteristics of a leader and self-analysis, noting that one cannot be a good leader without knowing his/her weaknesses and strengths to make amends or consolidate gains.

She continued that International Women’s Day (IWD) is to reflect on the challenges and successes confronting women worldwide and proffer suggestions to address them, recalling that MCSL has been celebrating IWD since the mid-1990s and organized the first peace education workshop in Sierra Leone.

While commending Cliff College for the training and wished women a happy International Women’s Day, Mrs. Maude Regina Peacock also acclaimed the team for its sustainable interest in Sierra Leone, informing that they are also supporting the Skills Training Center, selling their art and craft products in the United Kingdom, saying  God helps those who help themselves.

The lead trainer, Reverend Gilbert S. Hall, revealed that the Women’s Network is a powerful movement in MCSL and that they were here as servants to help the Network leaders. He said he served in Kenema District in the 1970s and is privileged to conduct the workshop with the hope that the fellowship would grow.

Reverend Dr. Mrs. Olivia Wesley, Principal of the College of Theology and Management appealed to members of the Women’s Network to be committed, be steadfast by not moving from here and there in search of salvation and urged them to be honest with integrity and speak the truth to move the work of Christ forward.

Reverend Dr. Mrs. Olivia Wesley also called on members of the Network to support each other, find time for God in the midst of their busy schedules as well as promote the Network and bless others when they are blessed.

Reverend Arnold Arch-Campbell also offered prayers for the success of the workshop while singing and prayers climaxed the event.

Other dignitaries who made statements included the President of the Women’s Network who said the workshop was to prepare them for leadership roles in the church and state, affirming that Jesus Christ was a great model of leadership which is about serving others.

The vote of thanks was rendered by a participant who reiterated that women are the bedrock of the church and pledged, on behalf of her colleagues, to apply the knowledge gained.