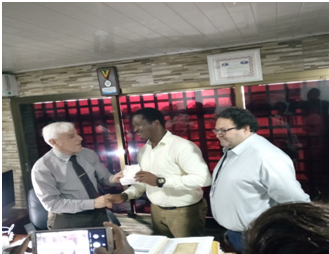 Baby Mustapha developed funny symptoms including an unending jaundice around three (3) from his birth. Upon several diagnoses and treatments the doctors suspected he had CYST so he underwent a surgery of 19 stitches cut only to realize it was a rare disease, Billiary Atresia. He is then recommended for an urgent liver implant in India at an approximate cost of USD$ 30,000 which is expected to all expenses.

During the presentation, the Managi ng Director, Mercury International intimated those present that Mercury was approached by Ishmeal Alfred Charles, who is working for Caritas Freetown branch and lead facilitator to raise funds to save baby Mustapha.

“Haven reviwed the proposal of baby Mustapha, it captured our attention because it has to do with saving the life of a young inocent child who is massively battling to survive. He needs help to save his life, so as a Company, we waisted no time but to cheap in”.

Presenting the cheques, the Chairman Mercury Charitable Foundation, said as part of its coorperate social responsibility, it behoves Mercury to help save the life of that poor child. I almost wept when I saw the video with his mother appealing for help, it saddens me a lot. We have been donating in areas like sport, education, physically challenged and health. So this is not new to Mercury.

“They presented a proposal of USD$33,000 to us, after reviewing it, we realized that they have risen close to USD$15,000. Taking the urgency Baby Mustapha’s situation, we met as a management and agreed to pay the remaining amount”. The Chairman said.

Receiving the cheques, Ismeal Alfred Charles, lead facilitator to help raise funds for baby Mustapha while making a statemnt said he is usually a talkative but short of words today for the unflichinng support Mercury has demonstrated in helping to save the life of this young child.

“We are supposed to travel to India on the 16th June, 2018 on Doctors advice. Initially, because of the slow pace of donations, the possibnilities of us traveling on the above date was blink. Now that Mercury has rescued us with this whopping amount, we are sure of traveling on the said date.

“We have contacted several business houses and Government Institutions with limited hope raising the required amount. On behalf of the mother, we are highly appreciative to Mercury for helping to save the life of this promising young child.

The Mother is also presentgly sick due to depression and exortion; she has been advice to rest because she has consented to donate her liver to be implanted into Baby Mustapha. As such, she needs to be in a stable health condition. All her calls have been diverted. Says Ishmeal.