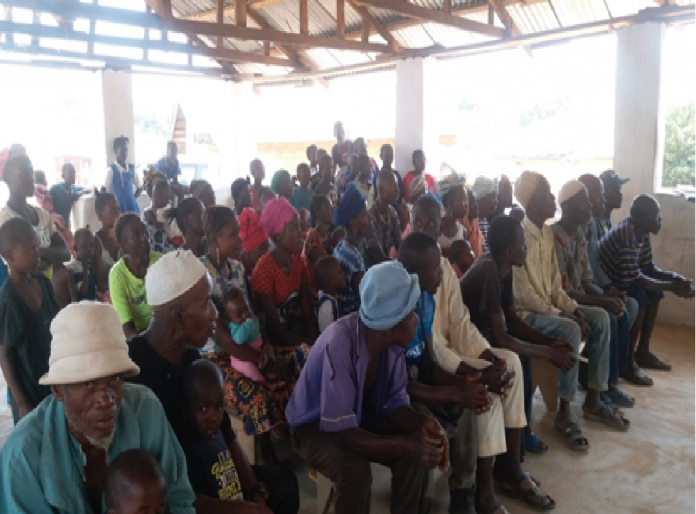 Residents of Masundu Kongorteh listening attentively to the ACC messages

Stakeholders and other inhabitants of Masundu Kongorteh community in Gbense Chiefdom have benefited from anti-corruption messages delivered by the Anti-Corruption Commission (ACC) Sub Regional office in Kono District.

The first-time event in the diamond-mining community was held on Wednesday 15th January, 2020 as part of the ACC’s obligations to raise awareness on the debilitating effects of corruption on national development, and the desperate need to earnestly fight off the scourge.

In his statement, Aiah P. M. Sourie, Public Education Officer, ACC Kono office said, corruption has had far-reaching consequences on every stratum of the public and private sectors in the country. He pointed out that quality public service delivery, in particular, is seriously challenged by the conduct of public officials who consider self at the expense of those who should benefit from their services.

He added that corruption fosters underground transactions, deprives Government of needed funds, widens the gap between the poor and the rich, stifles the rich potentialof the youth, and festers resentment among vulnerable communities. The last of these few downsides of corruption mentioned, he said, ‘can touch off prolonged conflict in a country, which in itself, can cause very serious consequences.’

‘Our beloved country will continue to lag behind other countries in terms of development, if we allow corruption to persist,’ the officer stressed, adding, ‘we must therefore take responsibility to purge our country of every element of corruption for our own good as a people.

The Sub Regional Manager ACC Kono Office, Hawanatu O. Kamara, detailed the gains made in the fight against corruption with emphasis on effective and efficient service delivery, especially in key Ministries, Departments, and Agencies. ‘If we fight corruption as a sworn enemy to our national development, we are bound to win the fight. But this will demand a positive mindset toward taking the interest of our country above all else. When corruption is defeated, our schools, hospitals, and other institutions will give quality services to the public. And government will have the resources to meet the needs of the masses,’ the Manager underscored.

Mrs. Kamara further informed the people of Masundu Kongorteh that the ACC has the authority to clamp down on corrupt individuals and throw the book at them. ‘The Commission offers no one any treats once found culpable of an act of corruption. As we share with you these pieces of information, we urge you to take the bold step and join in the fight against corruption. How? Resist, Reject, and Report corruption. You can make a genuine report on corruption to ACC by calling 515 on both Africel and Orange lines. You don’t need to mention your name when reporting.’

Referencing the ACC Amendment Act of 2019, Intelligence and Investigations Officer, Alpha G. Koroma said the Commission has assumed more powers in its legal mandate to fight corruption. He disclosed that a one-count charge on corruption attracts a minimum fine of Le 50,000,000 and/or a minimum prison term of five years. As such, he implored the locals to abstain from corruption to avoid what he described as a ‘horrendous experience’. The officer also drew the attention of his audience to the fact that the Intelligence and Investigations Department is mainly charged with gleaning facts or evidence relating to allegations of corruption strictly by procedure. And in the process, the Department becomes less friendly than the Public Education and Outreach Department. He, however, stressed that the ACC is by no means an enemy to anyone or any group of people; and therefore, should not be considered as a witch-hunter.

Chief Kai J. Bonga, on behalf of his people, considered the interaction with the ACC as timely and educative. He revealed his community has never before had any contact with the Commission. He therefore called the engagement ‘a blessing’. The chief praised the ACC, condemning corruption as a real enemy of progress. ‘I must confess, I did not understand before that corruption can have devastating effects on us. What is more, I never really knew how much seriousness the ACC and the Government attach to fighting corruption. I think I know better now and so do my people.’

Chief Bonga pledged his support to the fight against corruption. He said his people would do the best they can to ensure that their community is rid of corruption.

The session was moderated by Public Education Officer Edward Nathaniel Blake, who reechoed the ills of corruption citing instances within the host community, and the benefits that will accrue if the menace is defeated in both public and private institutions in Sierra Leone.

Even though Masundu Kongorteh is a diamond-mining community and is located five miles away from Koidu City, it has no Peripheral Health Unit. And the feud between cattle rearers and crop farmers make part of the daunting challenges the community experiences.