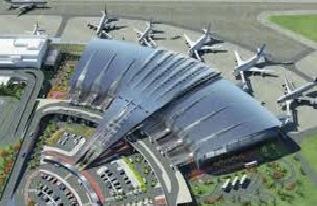 He said the thorning issue problem now on the floor is whether to build a new Airport or use half of the money to revamp the Lungi International Airport as well as buying new ferries. “But crossing the river with ferry is dangerous and will always pose problems with time as well as cost implications. But with the Mamamah, one just have to drive on the road at your time with no problems,” he advised.

The first benefit, he said about the airport will increase number of flights into the country and the airport can be a hub for the sub-region.

“Secondly, the airport will create many jobs for Sierra Leoneans and will improve tourism in the country,” he added.

He averred that the road leading to the airport is yet to be developed and that it is was about time the government to see reason to develop an industrial park, which he said is needed to  build the country’s infrastructure.

Mr Zuo said the power grid line passes along that route and it will be easy to get power supply for the industrial park as electricity is of great importance.

He also said that the River Rokel water project that the government is embarking on is also an added advantage if they can build the industrial park which he said will have enough water and electricity to produce finish products in the country.

“With an Industrial park, some of the products will be sent out as raw materials and they can come in again as raw material and it can be produced in the country,” he said.

Mr Zou said China is planning to build a textile industry in Sierra Leone and it will be built around that area, which he said will help the government in creating an industrial park as the airport will be close by to receive and airfreight cargoess. He said Sierra Leone industrial development is key to the sub-region and to China as China is the largest trading partner to Sierra Leone. This, he said should not only be in raw materials but also in finished products that can be exported to China.