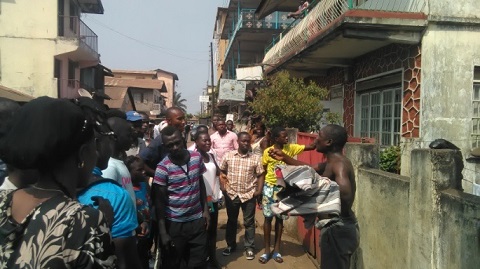 The incident took place inside a compound with few residents along Edward Lane in Freetown. It all started when the self-styled magician entered the compound with a few unknown others who introduced him as a magician. The self-styled magician started out first by causing the disappearance of minor objects like cups, plates and other small objects before he challenged the spectators that he could cause the mobile phone of a young lady in the compound to disappear and he would retrieve it later.

After accepting the lady’s expensive Samsung mobile phone, by some clever trick the phone did not reappear after the magician placed it inside his shirt. Moments later however when he failed to produce the phone the lady raised alarm. It happened that somehow the people he entered the compound with melted and the self-styled magician was left alone to face the music.

Faster that the speed of light crowds gathered as the lady grabbed the self-styled magician and began shouting “thief…thief.” Try as he could to convince the spectators that they would have to allow him go to a nearby yard to get some leaves needed for the magic act to work, he was given a sound beating and later whisked off to the New England Ville Police Station.