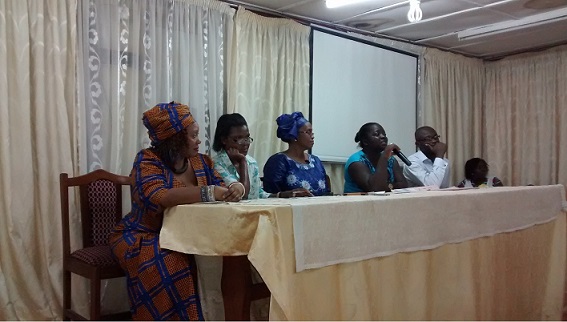 Speaking at a press conference, Madam Yasmin Jusu Sheriff, the Regional President for the Manor River Union Women and also member of the CCEPM, said as an organization during the past three weeks the team have engaged the youth commission, women ministers, APPA, SLAJ, Archbishop Tamba Charles, HRCSL and the minister of social welfare, gender and children affairs in frank and constructive discussion on a wide range of issues related to the issue of promotion and protection of Girls’ Education and the Ban on exams.

She pointed out that everyone CCEPM has met welcomed a reversal of the ban by government as being in the interest of the girl, their families and the nation.

She added that CCEPM was reminded that President Koroma himself has called for New Beginning in post Ebola in Sierra Leone and advised to meet on certain additional important player, and also CCEPM was encouraged to continue raising the issue for public reflection and discussion.

She went on to state that CCEPM made the case that the 2010 cabinet conclusion to disallow pregnant girls from taking exams is no longer useful in the post ebola and should be discontinued for many reasons including.

She noted that It is counter- productive and wasteful for government to have paid for and entered girls for exams and then later prevent them from sitting the exams just because they visibly pregnant at the exams time.

She said that Ban on registering for and sitting exams undermines the new special Education program for pregnant girls recently set up by government one month ago, she adding that Ban on exams discourages girls who are anxious to continue learning as Worldwide statistics indicate that 90% of girls who drop out of school due to pregnancy never return, but in Sierra Leone, the figure higher 95%. She also said that the time off when visibly pregnant combined with compliance with the 6 month exclusive breastfeeding policy in the country.

She maintain that over a year of absence from schooling for a girl mother, and also  recent GoSL led research shows that there are over 14,000 pregnant girls (under 18) due to the  Ebola outbreak in  Sierra Leone. She added that every one of these children is important and deserves a genuine second chance through uninterrupted education in the country.