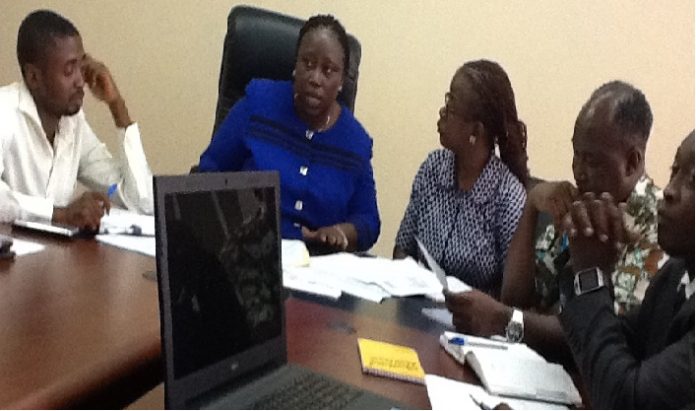 Mrs Hanciles dilated on the mandate of the Board such Legal Representation, Education, Advice and the Alternative Dispute Resolution which has been extended to some One Hundred Thousand Sierra Leoneans.

She Reminded the Legal Aid Board Partners of the rule that, ‘Ignorance of the Law us no excuse’ and that Electoral Courts that have been set up to speedily try electoral matters. Those trials should serve as a deterrent to would-be trouble makers.

Mrs Carlton-Hanciles advised her audience to work hand-in-gloves with the police in their different communities, and not relent or be afraid to inform the police of any suspicious activity.

Community cooperation, Mrs Carlton-Hanciles pointed out, will make the Anti Elections Violence Campaign effective, which will ultimately make the coming Elections peaceful, and that a strong message will be sent to the violent people in Sierra Leone.

The Executive Director called on Sierra Leoneans to stand up for peaceful elections with a Peace match on Wednesday 31st January.

Peaceful elections Mrs Carlton-Hanciles concluded, will give people the free hand to make their choice for representation in the Parliament.

Consultants Francis Gabiddon and Memunatu Pratt also advised the parked full hall of peaceful citizens to continue in their strides in partnership with the Legal Aid Board, to observe and spread the message of peaceful elections.