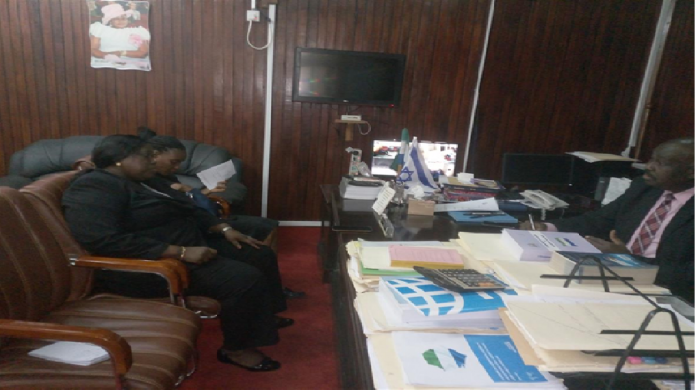 16 January 2020: The Legal Aid Board has had its first meeting with the Chief Justice of the Republic of Sierra Leone, Justice Desmond Babatunde Edwards in Freetown to brief him on work of the Board particularly regarding matters relating to trial of inmates.

The Executive Director of the Board, Ms. Fatmata Claire Carlton-Hanciles briefed the Chief Justice on the findings of the end of year meeting the Board had with 1,482 inmates at the Pademba Road Correctional Center in Freetown on the 18 December 2019.

She noted that overcrowding in Correctional Centers particularly those in Freetown and the regional headquarter towns continues to be a problem in spite of the ongoing efforts at reducing them. ‘I have witnessed inmates from Courts from Ross Road misbehaving at the Pademba Road Correctional Center because they have not been standing trial for quite a while,’ she said.

Ms. Carlton-Hannciles noted that many of the sentences imposed at both Magistrate and High Court levels are too high. She therefore appealed to the Chief Justice to develop a sentencing guideline for all felonious offences which do not fall under death penalty as a short term measure. She drew particular attention to long sentences imposed on those convicted of Robbery with Aggravation even though the aggravating circumstances do not result in death or serious fatalities.

She raised the issue of bail at magisterial level and called on the Chief Justice to do more to ensure accused persons are granted bail. She further noted that the issue of mental health patients who have not been referred to the Kissy Mental Hospital. She emphasized the need for age assessment to address the issue of juveniles who are treated as adults.

She noted that her team met with inmates at the Pademba Road Correctional Center in December 2019 who it is claimed are adults. ‘However, these inmates look like children to us,’ she said.

Ms. Carlton-Hanciles disclosed plans to commission a study to look at the types of offences, length of sentences, age of inmates and the amount of money spent on them to help inform Government and policy makers on reform of the Sierra Leone Correctional Service.

The Chief Justice assured Ms. Carlton-Hanciles and team that he will continue to build on gains he has made in reducing the prison population. He welcomed the Presidential Pardon which has also reduced the prison population in no small way. He promised to send personnel to the Pedemba Road Correctional Center to do a follow-up assessment.  He disclosed that he is planning on having a Judicial Week similar to the one in 2019 to address the justice problems facing inmates highlighted by Ms. Carlton-Hanciles.

He noted that action is being taken to address the issue of jurors for capital offence. He added that his office is developing a paper to address the problem. He underlined the need for a Juror Management body which will identify personnel from Ministries, Departments and Agencies (MDAs) to serve as jurors. ‘We are targeting 300 jurors for Freetown and 50 for each of the other regions,’ he said.

Speaking on the issue of inmates with mental health problems, the Chief Justice expressed surprise at the fact that they had not been referred to the Kissy Mental Home.

Both discussed the need for a sentencing regulation to address the issue of over-sentencing. Particularly those with very high sentences like the inmate serving a 90-year prison term.