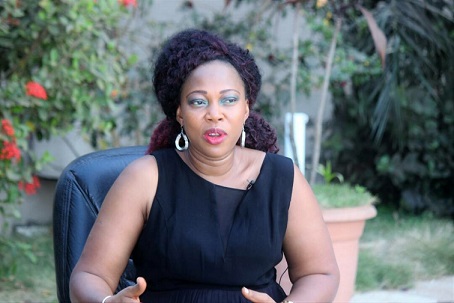 Speaking to this medium, the first lady said: “Let me also make it clear here that none of our celebrity friends where paid anything, instead they donated to our hospital, visited our schools to talk on teenage pregnancy and did a workshop for our upcoming Actors and Actresses for free.”

She went on to say: “When you work with people the relationship you built with them will keep you together for life or break you. I am glad that they came to support us.”

According to Mrs. Bio, it is widely known that she was an actress and has got her own friends too, so if they want to come and support her on an achievement, adding that it is only during ones happy and sad moments that they know who their true friends are.

Mrs. Fatima Bio used the opportunity to thank and appreciate Allah first and to her team, Chief Ndomiana and crew members and the JMB women’s wing for putting together the best inauguration ever in the history of Sierra Leone.

She expressed dismay that some people tried to frustrate their efforts because according to her, she refused to allow them to mismanage the funds.

Responding to questions being asked by some people as to why she was assigned with the responsibility of heading the inauguration team, she comfortably bluffs: “I did because I am a brilliant event planner and I believe you did enjoyed the show.”

Rounding up, Mrs. Fatima Bio also used the opportunity to express profound thanks and appreciation to the management and staff of the home of leading, credible, factual and balanced news reporting, Africa Young Voices (AYV) Media Empire, Africell, Orange, Mercury, the security sectors and all local and international celebrity and friends of Sierra Leone for supporting the event.