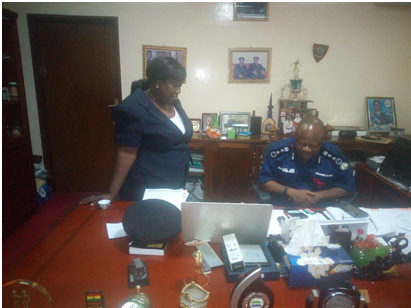 Ms. Carlton-Hanciles briefed the Inspector General on plans to set up Mediation Panels around the country in December 2017. The Panel will be established through the Board’s satellite offices – The Community Advisory Bureaus. ‘The Panels will operate before, during and after the March 18 elections’ she said, adding: ‘They will wrap-up operations four months after the elections in July 2018.’

On the core functions of the Panel, Ms. Carlton-Hanciles said they will be handling elections related issues which means they will advise communities on the Public Elections Act 2012, mediate minor civil matters in the community which would otherwise be taken to the Police or Courts. They will also help reduce tension in the community through public education campaigns on the election and human rights.

The two discussed the inclusion of the Police and Local Police Partnership Board in the Panel.  ‘It is crucial that the Panel works with Community Stakeholders, Civil Society Organizations  and the Police  to ensure there is no hiding place for those who would want to perpetrator violence or undermine the credibility of  the elections,’ she said. ‘The Panels will therefore assist with exposing perpetrators of violence, ensure they are brought to justice and by extension serve as a deterrent to organized crime.’

According to Ms. Carlton-Hanciles the Board has observed that a lot of criminal matters are not prosecuted because potential witnesses are not aware of the help they can render to law enforcement officers to bring perpetrators to justice.

Ms. Carlton-Hanciles showed the IG Munu a video of the jingle on anti-election violence developed by the Board, which is being aired on television stations. The jingle shows how intolerance, drugs and ignorance can lead to election violence. It further shows the consequences of engaging in violence as the accused was found guilty of ‘stabbing with the intention to kill’ and sent to a jail term of 25 years.

Ms. Carlton-Hanciles requested that mobile numbers of two senior police officers be made available to the Panel in their area of operation. In her view this will enhance communication.  ‘The Panel will be able to inform the police in a timely manner on incidences of violence,’ she said. ‘Experience has taught that minor disputes have degenerated into violence because the police have been late in responding to such situations.’

The two also discussed response to emergency calls from the Panel on election related issues by the Situation Room of the Police.