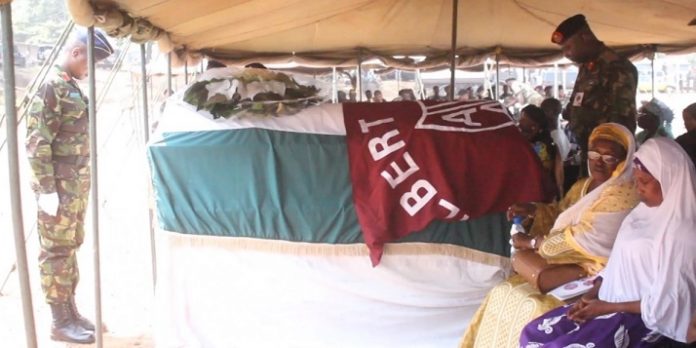 The late soldier served in the Sierra Leone Armed Forces for 39 years and during those years he became the first Lieutenant General of the country’s military which made him one of the longest serving personnel before he retired. He was replaced by the current Lt. Gen John Milton.

While addressing the ceremony Lt. Gen Milton said the death of his former boss came “as a shock to the nation, friends and family”, adding that Williams served the nation faithfully. He said S.O. Williams was a courageous soldier and made tremendous accomplishments during his time in the army.

Also making a tribute was Col. (Rtd) Bashiru Conteh who recalled that the late man served the army diligently, and called on relevant authorities not to relent in their search until the murderers of the late man were found and punished.

Tributes were given by his two sons one of whom almost broke down while paying his homage. The homily and final prayers were done by Bishop Dr. Mike Peper and was followed by Muslim prayers led by the forces’ Chief Imam. Internment was at the Military war graves where a 21-gun salute was given in his honour.