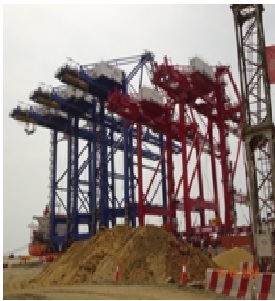 Yesterday 30th August, 2018 the management of Bolloré Transport & Logistics hosted the Deputy Minister of Transport and Aviation, Sadiq Sillah on a conducted tour of the new port and its facilities.

Addressing Bolloré staff and newsmen, the deputy minister said the New Direction is a government of serious business, adding that the new port expansion will definitely transform and improve sea transportation in and out of the quay.

He said: “Now Sierra Leone can host bigger vessels as countries like the USA does. Our government will ensure we uphold and support good projects we inherited and review those that we have problems with.”

The deputy minister expressed satisfaction with the project and encouraged Bollore to continue improving the port to international standards.

Country Manager of Bollore in Sierra Leone, Captain Fabjanko Kokan welcomed the deputy minister to the facility. He said, with six months of engineering and design study, Bolloré Ports has expanded the capacity of Freetown Terminal by building up a new 270 m quay with a draught of 13m, backed by 3.5 hectares of storage yard, taking the total capacity of the container terminal to 750,000 TEUs.

He said brand new state-of-the-art equipment, including two ship-to-shore gantries and four gantry cranes has been set up at Freetown Terminal, with the goal of doubling productivity at the container terminal within four years.

The new quay he went on, will be operational with ultra-modern equipment, adding that the whole investment, including infrastructure and equipment, amounting to $120 million, funded by Bolloré Group.

The project yet again demonstrates Bolloré Group’s confidence in Sierra Leone, a nation that is continuing to speed up its development through investment.