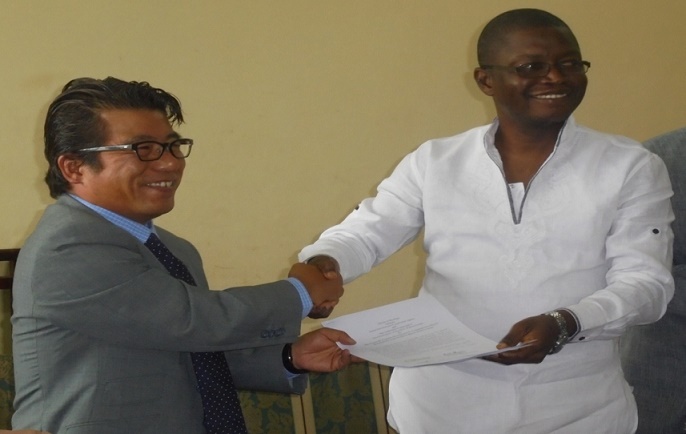 JICA has commenced the implementation of a disaster relief operation that will ensure that relief items such as 100pcs of tents,6,395pcs of blankets,1,320pcs of sleeping pads,163 sheets of plastic sheets,30 units of water purifiers and 1,500pcs of portable jerry cans are distributed across affected regions of the country.

The handing over ceremony was held yesterday at the office of the Vice President Victor Bockarie Foh at the presence of the Minister of Foreign Affairs and International Cooperation Samura Kamara in Freetown.

Handing over the donation the Ambassador of Japan to Ghana covering Sierra Leone Kaora Yoshimura expressed sincere condolences to the bereaved and sympathized with to all those affected by the disaster.

He said the items handed over are useful as the people of Japan have a deeper understanding of the hurt caused by the disaster.

He expressed hope that the items will bring some comfort to the victims and urged the government to use the items for the intended purpose.

The Vice-President Victor Bockarie Foh while receiving the items expressed profound thanks and sincere appreciation to the Government of Japan and JICA to our appeal for support in dealing with the effect of the August 14, 2017 Mudslide and Heavy Flooding.”

The Government of Sierra Leone assured that items would be well distributed: “The Office of National Security in the Office of the President together with other partners and civil society organizations are working tirelessly to rescue and recover victims of the mudslide.”

The heavy floods affected densely populated communities, especially the West of Freetown and the Western Area Rural District of the capital. An estimated six thousand or more inhabitants were affected.

The Government of Japan and JICA is committed to assisting the good People of Sierra Leone overcome the effects of the unfortunate disaster and contribute to the overall development of the country, the Japanese Ambassador said.

Signing of delivery documents formed a high point of handing over ceremony.