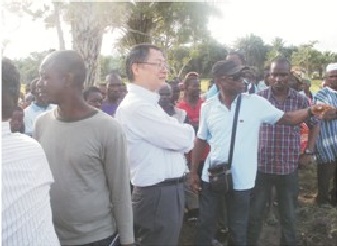 The objective of the project according to a visiting Counselor of the Embassy of Japan in Ghana Sigeru Umetsu is to support smallholder farmers in the Port Loko District with an aim to improve food security, by building the capacity of smallholder rice producers in Sierra Leone.
He said Sigeru Umetsu through the initiative “Food-for-Asset” the project aims to rehabilitate unproductive swampland and build irrigation infrastructure, whilst farmers will receive rations of rice bought from local farmers’ organizations through WFP’s Purchase for Progress (P4P) initiative in exchange for their work.
He said farmers will also be trained in improved production and post-harvest techniques with the support of partners and the project will be implemented over multiple years which is part of Japan’s commitment to double the production of rice in Africa between 2008 and 2018.
During an on the spot visit to one of the developed swamp lands project site in Buya Romende Chiefdom in the Port Loko District farmers expressed gratitude to the people and Government of Japan for providing them the necessary support in swamp development.
The farmers explained that they have rehabilitated ten swamp land sites within the district and they have also been trained in rice production, post-harvest techniques and group management.
The project according to WFP and BRAC Sierra Leone officials covers 105.6 hectares of inland valley swamps which have been rehabilitated and they have distributed over 100 metric tons of locally purchased rice for Food for Assets activities in swamp development.
6.6 metric tons of seed rice of Nerica L19 was also distributed to 528 small holder farmers for cultivation with 26.4 metric tons of fertilizer distributed to the farmers.
The project they said has also reinforced the capacity of target groups especially women to increase food production and income for the farmers.
Since the implementation of the project in the district, harvest has increased productivity from 1.86 metric tons per hectare to 2.6metric ton per hectare.
Some of the farmers appealed to the Japan envoy to support the construction of drying floor and storage facility so as to reduce post-harvest losses.
The farmers expressed thanks and appreciation to Japan and their partners for their support to farmers in Port Loko District to increase food production to alleviate poverty.