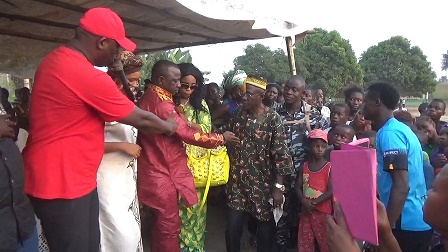 He further stated that he had chosen the village for this year’s celebration because it was one of the main routes the Revolutionary United Fronts, RUF, rebels took to enter Freetown.

He called on government and people of Sierra Leone to recognize and continue to commemorate January 6 just like how special attention was normally being given to June 16 in South Africa. He went on to urge government to declare January 6 as a day of fasting and praying for those who lost their lives during the country’s decade-long civil conflict.

In his speech to pupils of the District Education Community School Bangura noted that the decade-long civil war exposed many young people to drug related activities, violence and other anti-social ways of life.

He admonished pupils to use education as a key to their success, noting that every child has the right to education, and that they should be provided with teaching and learning materials and with trained and qualified teachers.

The sports director also encouraged the girl child in Makoloh village to take their academic work with all the seriousness it deserves and cautioned them against teenage pregnancy and early marriage.

Head teacher of the school, Tommy Momoh, expressed gratitude to the director of sports for the initiate.

“Some of us are victims of the war and I am calling on Sierra Leoneans to always reflect on the disaster January 6 brought upon us,” he said.

Ibrahim Sheiku Koroma, a class-5 pupil, said he didn’t witness the rebel war but what his grandmother narrated to him about what she went through during the war was nothing good to write home about.

Abubakarr Gbankay, an amputee who lost his right limb to the war, said he appreciated the idea to commemorate the day with them but noted that they as amputees were suffering without any help from government and the organizations responsible for their welfare.

The celebration was climaxed with feeding of pupils after a football gala that saw the Makoloh community thrash Songo Community by 4 goals to 1.