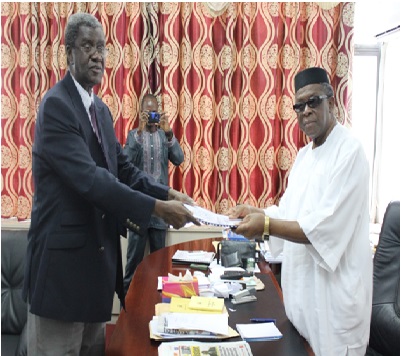 Mr. Collier pointed out that the document clearly advocates the need for civilian police oversight and accountability to be enshrined in the Constitution together with a case made for an independent IPCB legislation.

Receiving the document, the Chairman of the CRC, Justice Edmond Cowan stated that it was the first time Government was giving its citizens the chance to play a major role in the Constitutional process. He said: “The people are very much important in this whole exercise and without the input of the people the Constitution will not have the kind of credibility and acceptance it should have”.

Justice Cowan added that the responses of the citizenry have been very positive and the CRC was working towards producing a Constitution that would stand the test of time.

He commended the IPCB for the presentation and stated that the establishment of the Board was a laudable initiative, recalling that popular calls had been made for Government to create an independent civilian oversight body for the Sierra Leone Police Force.

In the document, the IPCB identified areas that could be included in the Constitution wherein the legal architectural framework of the Board could be further strengthened, among which are:-

iii.              ensuring that recommendations made by the IPCB receive adequate attention by state actors, and

The issue of the Chiefdom Police Forces and “City Council Police” was raised by participants during Community Town Hall meetings organized by the IPCB on Wednesday 18th November 2015 in Bo and on Thursday 19th November 2015 in Kenema. Repeated observations were made regarding the non-provision within the current IPCB Regulations for oversight of Chiefdom Police Forces and City Council Police, both of which have been characterized as ‘traditionally heavy handed’ when dealing with people, especially the lower stratum of the social pyramid, which are perceived as potential source of restiveness particularly among the younger generation who appear to embrace a more liberal outlook to life.

Similar views had previously been echoed during a BBC Media Action live debate programme held in Freetown on Friday 30th October 2015, by a representative of Abacha Street Market women and traders.

The inclusion of the IPCB would not only enhance and entrench the IPCB but would also send a strong message to both the Sierra Leone Police (and other policing agencies) and the public regarding the government and peoples’ commitment to ensuring the success of civilian police oversight. This will also serve as a demonstration of Sierra Leone’s commitment to reform and professionalizing the police, and to build public confidence in the police themselves.