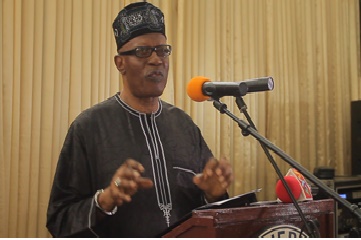 The seminar was to help student understand the dynamics of International Business and to help them have the required mentorship to becoming self reliant after their university education. As a business bastion educational institution, the administration of the Institute of Public Administration and Management (IPAM) believes that the students should not only depend on theoretical aspect of business but also experience the practical.

Deputy Vice Chancellor of the Institute of Public Administration and Management (IPAM), Professor Allyson Sesay said the event would strengthen the relationship between the university and the business world.

Deputy Minister of State II in the Ministry of Finance and Economic Development, Honorable Dr. Patrick Conteh said for any economy to develop, it needs to focus on attracting, maintaining and expanding investment. He said Asian countries were very poor but they are developing because of strong political system, strong public sector, well articulated national plans and massive industrializations.

He further stated that government had done a lot in those aspects citing the improvement on the Energy Sector, provision of a commercial court to protect investors and removal of custom duties among others. He said the government had also implemented sound policies to attract investors. He went on to say that as a government, they have increased support for small and medium-sized enterprises (SMEs) by strengthening Micro Finance, a situation he used to describe the potential Sierra Leone has to develop despite the numerous challenges.

Speaking on the topic The Role of Commercial Banks in Enhancing International Business, the Managing director of Ecobank Sierra Leone Limited Winston Williams said commercial banks enhance International business by collaborating and making it easy to transact through digitalization and the provision of Foreign exchange.

Chief Executive Officer for Sierra Leone Investment Agency (SLIEPA) Raymond Kai Gbekie said African countries sell their raw materials in low cost and buy expensively the end products of their raw materials. He said African countries including Sierra Leone had failed to realize their potentials in the global economies. He uttered that seminars are very important in changing the mind sets of Sierra Leoneans especially students.

CEO for PEC Malador SOWE said the growth of the nation depends on the private sector stating that Sierra Leone has an untapped economy which if tapped will give Sierra Leone a new face. He said individuals are working assiduously to increase supply whiles demand remains stagnant. He asked the student to be innovative and create sustainable business ideas in order to be self reliant.

Delivering the keynote address, the Ambassador of the People’s Republic of China to Sierra Leone, Wu Peng said China is the second biggest economy in the world and this is as a result of economic globalization. He confirmed that China is contributing thirty percent of the global economic growth. He further stated that China had been very supportive to Sierra Leone without asking for anything and they would continue with that.

Students said the seminar was very educative and they would put into practice what they have learned and also pass on the knowledge to their colleagues.