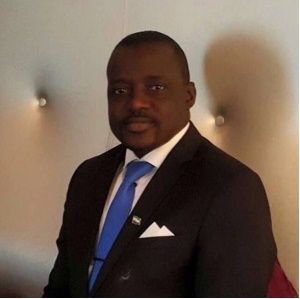 Hon. Bangura disclosed such planned agreement with this medium (The Universal Times Press) via an exclusive telephone interview from his Hotel suite in Beirut during his official visit to Lebanon alongside the Vice President of the Republic of Sierra Leone, Ambassador, Victor Bockarie Foh who also doubles as head of the delegation.

In light of the aforementioned, the Lebanon Information Minister, Ramzi Joreige also expressed his admiration for the development strides achieved so far by the APC Led Government under the outstanding and result oriented leadership of His Excellency, Dr. Ernest Bai Koroma, thus presented a gift to Hon. Bangura in a bid to register the Government and People of Lebanon’s commitment to the empowerment of the SLBC, SLENA and by extension the Ministry of Information and Communications in Sierra Leone accordingly.

In response, Hon. Mohamed Bangura thanked his counterpart for the gift and promises, thus promised to promote the bilateral ties between both countries and share best practice in the interest of the general good.