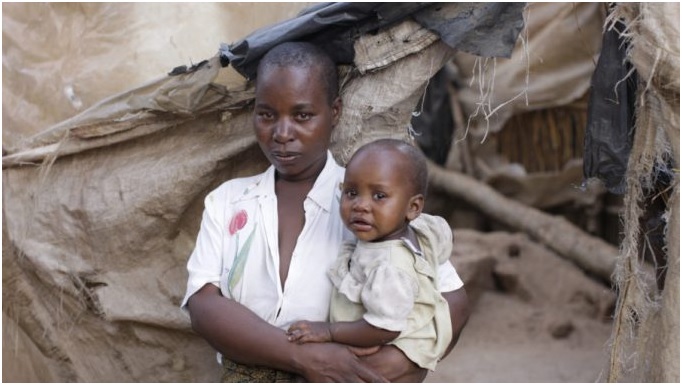 “It is readily acknowledged that the monitoring, measuring and tracking of the more than 200 indicators associated with the SDGs will require data of a far finer granularity and precision than is currently routinely collected in the global South. Doing so will pose formidable challenges to national statistical systems in the global South. These will be felt by countries, particularly around budgets and finances and building and sustaining the required capacity,” he concludes. (Photo: A decade of abject poverty in Sierra Leone).

Writing in theconversation.com last weekend, this is what he said:

The United Nations’ Sustainable Development Goals that countries have committed themselves to striving to reach by 2030 are a watershed in the global development agenda.

Vast resources will be allocated internationally and at all levels of government to ensure that the effects of the 17 goals are maximised. These range from ending poverty and hunger to mitigating the effects of climate change.

The SDG agenda and the efforts that will be expended to meet these goals must be welcomed. But the global development community should not be blinded to aspects of the agenda that appear to be neglected. These aspects may hamper efforts to achieve those goals.

The first relates to a core guiding principle of the SDG framework that “no one should be left behind”. The second relates to the risk that in the rush to measure, monitor and track the progress towards meeting the SDGs, countries in the global South may find themselves disempowered.

Unless steps are taken to address these two gaps, efforts and resources may be misdirected, and the benefits of the 2030 development agenda may not be shared equitably.

Leaving no one behind

This mantra in the SDG framework shows the clear intention that the fruits of achieving the SDGs should be shared equitably. Meeting the goals means meeting them for everyone, not just on average. Expressed like that, it is certainly a laudable ambition.

Certain dimensions of “no one left behind” are laid out in the framework. These include income, sex, age, race, ethnicity, migratory status, disability and geographic location, in accordance with the UN’s Fundamental Principles of Official Statistics. The principles lay out the framework for the collection, analysis and dissemination of official statistics.

The use of simple binaries, such as sex for example, do not provide the space for transgender or intersex communities to be counted. Equally, not all minority populations – particularly those that fear, or experience, state-based discrimination or harassment – will want to be able to be identified in bureaucratic data. The question of who is to be counted so as to not be left behind is, fundamentally, political.

The concept of leaving no-one behind has further – more distal – ramifications in the global development agenda.

It is readily acknowledged that the monitoring, measuring and tracking of the more than 200 indicators associated with the SDGs will require data of a far finer granularity and precision than is currently routinely collected in the global South. Doing so will pose formidable challenges to national statistical systems in the global South. These will be felt by country particularly around budgets and finances and building and sustaining the required capacity.

There are two ancillary risks associated with these challenges. First, the centre of gravity to design interventions and strategies to meet the challenge lies in the global North. Internationally leading universities, corporations, and think tanks lead the way.

These organisations have larger budgets, and greater capacity, than their counterparts in the global South. With this comes the risk of solutions being designed in the North and piloted and implemented on a one-size-fits-all basis in the South.

Local specificities, dynamics and politics may be ignored. And the consequence is that methods and solutions shown to have some efficacy in one setting may be assumed to be as efficacious elsewhere.

Equally, without solid buy-in from local partners, these interventions may come to be seen as being as heavy handed and removed from local realities. This was the case with the Structural Adjustment Programmes pursued by the World Bank in the 1980s.

The second risk, in the absence (or failure) of sustained efforts to rebuild and recapacitate the national statistical systems of the global South, is that the data for measuring, monitoring and tracking the progress towards the SDGs will increasingly be drawn from complex statistical and econometric models built and designed in the global North.

Already, the Institute for Health Metrics and Evaluation (IHME) produces model based estimates of child mortality for all countries in the world. New versions of the model are capable of producing estimates at a sub-national level.

Similarly, the spectrum suite of demographic and epidemiological projection models is often used in the global South to produce estimates of population, HIV prevalence, or numbers of people in a country requiring antiretroviral therapy.

While there is undoubtedly need for such models, it would be a grave error to conflate the model results with the reality of what is happening. No model is perfect, and the results should –- at best -– be regarded as providing an approximation to the measure in the absence of empirically observed and derived estimates.

But the risks extend beyond that of model based error. Models of this kind are frequently “black boxes” – with their inner working only fully understood by a very few. One should ask how many health researchers, epidemiologists, statisticians, and demographers there are in countries in the global South who are capable of interrogating and questioning the results of such models, based on their own observations and experience.

Where this knowledge is either not drawn upon, or is absent, the risk is that countries in the global South may become increasingly dependent on the results of those models to provide the data required for monitoring progress towards meeting the SDGs.

Leaving no-one behind is a catchphrase that ensures that all people benefit from the global development agenda. But the power to name those categories of people that should be monitored to ensure they are not left behind is neither neutral, nor necessarily benign. States should be engaging positively with domestic institutions and civil society organisations to determine for themselves the delineations of those at risk of being left behind.

At the same time, states in the global South should also guard against interventions for data collection and management, or model based substitutes for those data, that may work to disempower local data communities. If not, these communities as a whole, may find themselves “left behind”.

* This is an edited version of a column written for the UN SDSN Thematic Research Network on Data and Statistics (UN SDSN-TReNDS).

Tom Moultrie is a Professor of Demography, University of Cape Town.