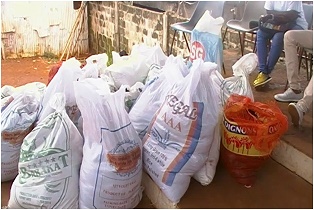 Mohamed Jaward Nyallay added “it very difficult to see young people committed for the purpose of Allah, because they are mostly into social clubs, sporting activities and other social commitment which normally keep them away from the work of Allah, but here we are today as a Muslims youth group existing for twenty five years it rear.”

Delivering the items, President Western Islamic Youth Advocacy Union (WISYAU), Alhaji Umaru Jabbie said the feeding programme was a way of bring Muslims together and that their organization is very much committed to continue their support for Muslims in their community.

He mentioned that assembling Muslims for the distribution was mainly to unite Muslims and the maintenance of the Islamic doctrines.

Founder of the Western Islamic Youth Advocacy Union Aruna Mans-Davies stated the rationale behind the formation of the organization as he expressed excitement for seeing members fulfilling that mandate. He mentioned that it was their commitment to serve Allah that made them to succeed.

He encouraged Muslims that were present during the distribution to be united in propagating the message of Allah.

The feeding programme attracted Muslims jamaat across the 12 mosques in which the organization membership is present.