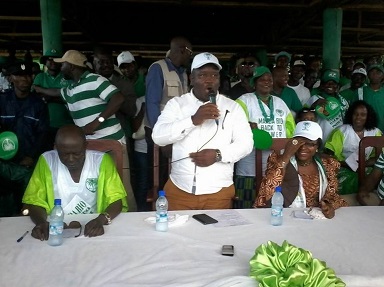 Speaking in Kenema City on Sunday 1st November, Rtd. Brig. Bio stated that in 7 days the country will be declared free of Ebola, but until then the people should not relent in the fight because Ebola is a very stubborn disease.

Rtd. Brig. Bio told the people that he was not in Kenema for politics, but to support government and international community to finish the fight against Ebola. To the loudest applause Rtd. Brig. Bio said: “I want to come for politics when I am not afraid to touch you, hug you and shake your hands because I am a grassroots politician.”

Speaking also at the social mobilisation event was the outspoken and respected Dr. Kadie Sesay, who thanked the people of Kenema and stated that the people have spoken with a great welcome.

She said the people have told the world Rtd. Brig. Bio is a quality product for SLPP and when the time comes they will tell the world why they are supporting Rtd. Brig. Bio. But that will be after defeating Ebola.

She also thanked the elders and everyone who came together to fight the Ebola disease and re-echoed Rtd. Brig. Bio’s message during the tour of no complacency.

The Mayor of Kenema City Council, His Worship Joseph S. Kelfala, welcomed Rtd. Brig. Bio and entourage to the city. He spoke on the Ebola situation in the district which he said has caused devastation for many people.

The programme was chaired by the eloquent and firebrand SLPP Eastern Region Chairman and Acting National Publicity Secretary, Hon Philip Tondoneh. As part of increasing women participation in politics which is in line with Rtd. Brig. Bio’s vision, the vote of thanks for the event was moved by the dynamic SLPP Kenema district women’s leader, Madam Ella Goba.

On his way to Kenema City, Rtd. Brig. Bio also made a brief stop at Blama, Small Bo Chiefdom, where he made a courtesy call on Paramount Chief Mohamed Dhaffie Benya V and appealed to all to continue to obey the bye laws until Ebola is finally defeated.

Meanwhile, as part of his social mobilisation routine, the Rtd. Brig. Bio and his entourage will visit officials of the Kenema district Ebola Response Centre today, Monday 2nd November to have a detailed report on the Ebola situation in the Kenema district.

The over 100,000 people who welcomed Rtd. Brig. Bio in Kenema have been the largest turnout of people since the final political rally in Kenema during the 2012 elections.

And considering this was not a political event and not politics season, one political commentator opined “Maada is just an extraordinary politician. He is the greatest political asset in SLPP. What makes the young man unique is the extraordinary outpouring of love by ordinary men and women. I just saw along Hangha Road an unbelievable sight of many women shedding tears of love as they sang his name in praises. It was emotional.”

As part of the welcome, the people of Kenema also organised a lantern parade and the highlight was a lantern depicting the famous and historic transfer of power between the Rtd. Brig. Bio and the late President Kabbah.