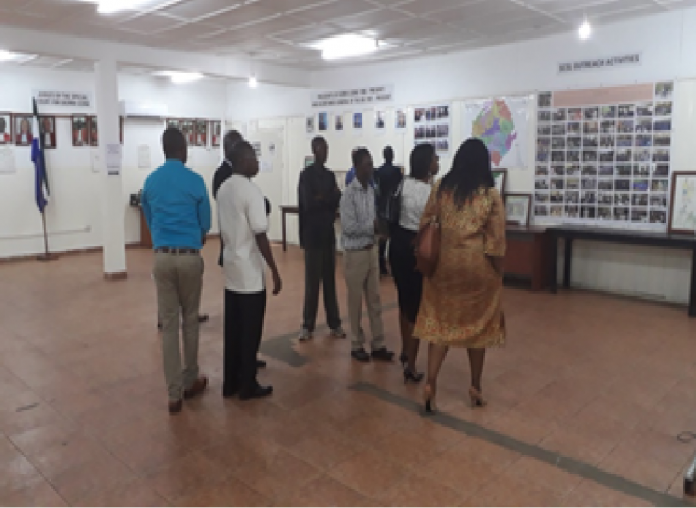 Commissioners and some Senior staff of the Human Rights Commission of Sierra Leone (HRCSL) on Thursday January 16th 2020 visited the peace museum at the former Special Court Building that is housing both the TRC and special court archives.

On Monday 19th August 2019, officials of the Residual Special Court of Sierra Leone held a meeting with Commissioners of HRCSL where it was explained that they were in the process of preserving the special court archives and that they wanted to do same for the TRC archives that were going bad. The HRCSL is the custodian of the TRC archives.

It was against that background that the HRCSL paid the visit of the rehabilitated peace museum.

The Residual Court Registrar, Bintu Mansaray explained to the HRCSL Commissioners and staff about the transformative steps taken to uplift the museum.

A professional archivist was hired to review all the index, verify index, change rust clippings, protect scanned documents and change of boxes containing documents. These works were done on the Special Court and TRC archives.

The Sierra Leone Peace Museum, which occupies the Special Court’s remodeled former security building, is a Legacy project of the Court and the Government of Sierra Leone. As an independent national institution, the Peace Museum honours the victims of the war, preserve the history of the war and the story of the peace process, build peace, and promote a culture of human rights.

The Museum hosts a full copy of the Special Court’s public archives, as well as the archives of Sierra Leone’s Truth and Reconciliation Commission (TRC) and other important historic documents for use by researchers and scholars. The Museum also houses an exhibition of pictures and artifacts to narrate the history of the war and the story of the peace process.