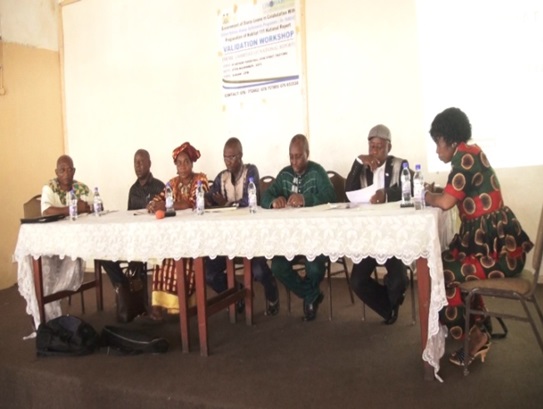 The validation was conducted in preparation for the third United Nations Conference on Housing and Sustainable Urban Development that would be held in Ecuador.

The move was required by the United Nations General Assembly for all country to prepare their report for the New Global Agenda.

According to the organisers, the drafted report focuses on five thematic areas ranging from urban demographic issues, land and urban planning, environment and urbanization, urban economy governance legislations, and housing and basic services.

Several representatives made relevant contributions in the validation process, with the Planning Advisor at the Ministry of Lands who also doubles as Focal Point, United Nations Habitat in Sierra Leone, Dr. Alphajoh Cham; stating that the key essence of the validation workshop was to ensure that everyone made an input into the document. He said the document is neither owned by the ministry nor the United Nations, but rather, for the general good of all Sierra Leoneans.

He said that that they have before now distributed the first draft report to all stakeholders, noting that their comments have been incorporated into the final draft that has just been validated.

Dr. Cham however noted that key amongst their expectation is to have the report validated by all stakeholders, and also to improve on the content itself for them to submit a well loaded report to the United Nations Habitat.

In her keynote speech, the Permanent Secretary, Ministry of Lands, Country Planning and the Environment Nancy Tengbeh, expressed appreciation on the strides of the Committee on Planning and implored the participants to pay maximum attention and contribute meaningfully to the finalisation of the validation.

She said that as a Government Ministry with the objective of maximizing the actualization of their goals in the Agenda for Prosperity, they have to obtain endorsement of some policies. She cited the national land policy which has been approved by cabinet and the facilitation of the HABITAT III National Report for Sierra Leone.

Madam Tengbeh informed about the revised Town and Country Planning Act, the sand mining policy and the national spatial development framework; all of which she noted, are on the sideline awaiting validation.

The Habitat III Conference reinvigorates the global commitment to sustainable urbanization, to focus on the implementation of a “New Urban Agenda”. Habitat III will be one of the first United Nations global summits after the adoption of the Post-2015 Development Agenda.

This is considered to be an opportunity to open discussions on important urban challenges and questions, such as how to plan and manage cities, towns and villages for sustainable development. The discussion of these questions will shape the implementation of new global development and climate change goals.