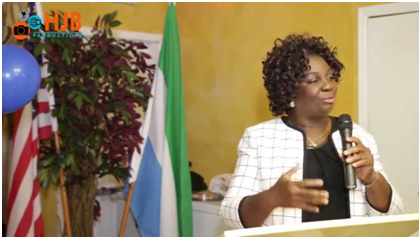 In her opening statement, before the launch, Madam Madina Rahman noted that the introduction of the injectable anti-polio virus  vaccine was one of the major steps taken globally and nationally through the Ministry of Health and Sanitation together with GAVI, WHO, UNICEF and other partners to completely immunize and eradicate polio in the world,  especially Sierra Leone.

She reiterated that this was an opportunity for under five children to be further immunized against polio virus to prevent them from polio myelitis, without which she noted can lead to morbidity and death in some instances.

She reminded that, there were series of other childhood illness/conditions like yellow fever, measles, diarrhea, tuberculosis, whooping Cough and malnutrition for which under five children had been immunized against. She called parents and care givers to always visit health facilities for essential routine immunization services, as their children would be vaccinated and protected against childhood illnesses.

Madam Rahman cautioned that even though there had been tremendous efforts in immunization, there was still need for children to be immunized against polio various using both Oral and Injectable Vaccines, because the virus still exists in countries like Afghanistan, which means children are still under threat against the virus and she referenced that Sierra Leone last experienced one polio case in 2010, which was imported from neighboring Guinea.

Officer in Charge, World Health Organization (WHO) Sierra Leone, Alexander Chimbaru, who made a statement on behalf of the United Nations Family congratulated the Ministry of Health and Sanitation for the IPV Introduction efforts and stated that they had waited since 2015 for the accomplishment of IPV introduction in Sierra Leone. He continued that there were series of efforts by partners at the global stage to ensure that this event becomes a reality, notable among them were WHO Global Polio Eradication Initiatives, UNICEF GAVI and the vaccines Manufacturers.

Mr. Chimbaru, reflected on the Global Polio eradication drive, stating that Thirty (30) years when the Global Polio Initiative was launched, Polio paralyzed 10 children in every 15 minutes  in over 130 countries of the world, however, only 22 cases of polio were reported from just two countries in 2017.

He however cautioned against complacency, pointing that not everyone who is infected by the polio virus develops symptoms, but can still pass the polio disease to others. “Though there were just 22 polio cases globally in 2017, there are likely thousands of carriers of the polio virus, knowing too well that diseases do not respect national borders, the only way we can be sure of keeping our children safe is to ensure that every child everywhere is immunized against childhood illnesses”. Mr. Chimbaru, asserted.

Dr. Maryse Dugue representing GAVI (Vaccine Alliance), regrettably recalled that thirty (30) years  ago when she was a doctor in Southern India were she was surrounded with many children paralyzed by the dreadful  polio virus, who could have otherwise been prevented. “That is the situation when you are not prevented against the polio virus disease”, she stressed.