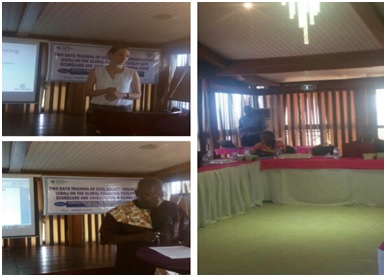 The scorecard was launch with the theme: “Driving Change and Ensuring Accountability and Result for Reproductive Maternal Neonatal Child Adolescent Health (RMNCAH)”

Executive Director of Health Alert, Victor Lansana Koroma said the purpose of the training and launching of the GFF scorecard was to join over 16 countries that are members of the GFF of which some have already organized similar events, while others are  yet to do so.

He revealed that about 63 countries are eligible to be members of the GFF but only 16 countries have so far registered and that he said includes Sierra Leone.

He said this is to ensure a positive change in the health sector landscape thus reducing infant and maternal mortality in Sierra Leone.

“Our key roles and functions as civil society in the GFF is to advocate, mobilize resources and drive policy change through engagements with governments and donors to contribute to the political prioritization of issues and diseases that are often neglected and to also mobilize resources for other important health areas so as reduce the Maternal Mortality and Child Mortality in Sierra Leone”. Health Alert Director stated.

The launching of the GFF scorecard, he said was to monitor and hold leaders accountable to ensure positive results in the health service delivery by making possible that these leaders are accountable to their commitments through targeted review, monitoring and actions at the global regional and national sub regional levels.

He went on to state that once the civil societies do this well, it could amplify the experiences of local communities, helping to identify barriers and bring citizens’ voices to relevant policymakers to systematically address them, building citizens ownership and sustainability of investments in the health sector.

He therefore urged government, donors and development partners and the private sector to take advantage of the GFF in Sierra Leone.

Giving the background of the GFF, Health Alert Consultant from the United Kingdom, Emily Cummings said the GFF has made considerable progress over the past 25 years in improving the health and the wellbeing of women, children and adolescents have been behind, dying and suffering from preventable conditions in considerable parts because of a large financing gap estimated at US$33 billion annually.

According to the consultant, over the past years, the GFF has created a new model with countries in the driver’s seat that brings together multiple sources of financing in a systematic way to support national priorities.

The consultant also said “the GFF approach emphasizes smart financing, getting more value for money from each of these sources by improving efficiency in perpetuity because these other financing sources enable the countries to reduce their reliance on external assistance and to progressively replace it as the financing source needed to improve the health of women, children and adolescent”

While making his presentation, Ernest Jabbie, representative of the Director of Reproductive and Child Health, MOHS stated that his ministry is firmly behind the launching since Sierra Leone remains one of the countries with high maternal mortality rate.

The GFF focal representative stated also that the initiative is a laudable one.

Mohamed Kapri Kamara who represented the Director of Policy Planning and Information, MOHS stated the ministry is working round the clock to reduce the Maternal Mortality Rate which is one of the highest in the world through appropriate health care financing system. He informed participants about the current plan to review the implementation of the Performance Based Financing (PBF) which will soon be piloted in two districts in Kailahun and Kono.