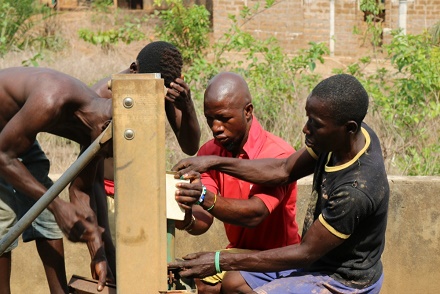 This tap is in the old Ebola treatment complex in New Maforki town northern Sierra Leone and it serves many communities within a seven-mile radius. They have not had treated tap water for the past eight days, and other water sources are not hygienic for cooking and drinking.

“The situation is very difficult at this time of the year, especially at the peak of the dry season. Wells dry up and this puts a lot of pressure on the hand pump.”

As the men work, the children throw questions at them to ask when the work would be completed. They reply without stopping their work. Sanpha is particularly grateful for this empathy  because 18 months ago it was not like this.

They had volunteered with the Safe and Dignified Burial (SDB) teams in their part of town during the Ebola epidemic. Among them were two body carriers, one infection prevention control personnel and one psycho-social support staff or community liaison.

Accounting for over half of all burials during the crisis, the Sierra Leone Red Cross and its team of dedicated volunteers worked tirelessly nationwide coordinating over 50 SDB teams at the peak of the epidemic.

At the beginning of the epidemic, public perception of the burial team members was not that welcoming, as they were considered potential transmitters of the virus. In many cases the volunteers were pushed away by their very own communities and family members.

“It was tough. We had to volunteer because people were getting infected by touching the corpses without taking precautions, and they were dying. Our families and friends became very worried and had to keep away from us. This had very severe effects on most of us.” Said Ibrahim, a member of Sanpha’s team.

Today Sanpha and his newly qualified team of plumbers are welcome in all the communities where they work. They travel to remote communities across Sierra Leone, fixing hand pumps and helping ordinary people get access to safe drinking water. Evidently, the switch of vocation has made them the darlings of communities once again.

“It becomes a difficult situation for us, especially suckling mothers; we cannot cook our food or drink clean water without their help. So, seeing them just makes us happy.” -Musu Bangura resident of New Maforki

The UNDP Project Manager, Lynda Buckwoski, said the project seeks to rehabilitate and reintegrate these individuals via the provision of psychosocial counselling and vocational and skills training to enable them access economic and livelihood opportunities.

“When we talk of reintegration we understand that the majority of these people lost their livelihood during EVD; schools were shut, university’s closed and people lost their businesses. UNDP alongside the IFRC wanted to reinstate life prior to Ebola” . Buckwoski said.

UNDP partners with people at all levels of society to help build nations that can withstand crisis, and drive and sustain the kind of growth that improves the quality of life for everyone. On the ground in more than 170 countries and territories, we offer global perspective and local insight to help empower lives and build resilient nations.