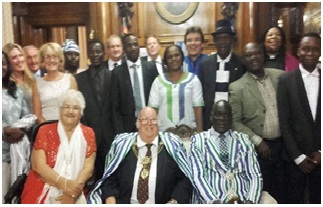 The Mayor of Freetown, inspired by the positive atmosphere of the Freedom Festival looks forward to such an event happening here in the future.  “We want a festival like this one, which brings people together from all over the country ….  to shake hands. It brings about unity and we see in Hull everyone behaving warmly with each other’.

One of the high points for the delegation was seeing Freetown Mix, a popular Sierra Leonean band based in Hull, performing on the main stage.

All the delegations were deeply moved by the number of people who came up to sympathize with them about the devastation caused by the recent mudslide. A special collection was made during the Freedom festival service at Hull’s Anglican Minster. The Freetown Society acted as the focal point for private donations by hundreds of people throughout UK moved by what they saw and heard in the media. Some Le 200 million has been sent to counterparts in the Hull Society in Freetown for immediate support of the victims.

For Simon Ingram-Hill, the Freedom Festival was one of a number of highpoints in the Hull-Freetown 2017 programmme.

At the official dinner, which closed the Sierra Leone delegation’s visit, the Lord Mayor of Hull stated: “It is wonderful to be able to share the celebration of Hull being the UK City of Culture with you, who have brought the richness of Freetown cultural life to the fore in our city.”