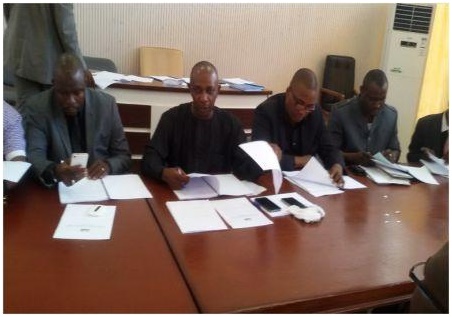 The Committee, which is geared towards laying a solid foundation for the engagement of the local councils, chiefdom functionaries and the Ministries, Departments and Agencies (MDA’s) especially the two key Ministries, Social Welfare, Gender and Children’s Affairs and  Local Government and Rural Development, so as to cascade development down at the local level.

Chairman of the Parliamentary Oversight Committee on Local Government and Rural Development, Hon. Abu Bakarr S.A.T. Koroma, said in his opening statement that they will strictly conduct investigation proceeding hearings within its set-up framework to all the councils in order to ascertain devolved functions that have been carried out in terms of developmental activities with successful achievements and of good standards.

Hon. S. A. T. Koroma added that the Committee will also focus on several key areas of council development as well as national level, including rehabilitation and roads maintenance.

The Chairman maintained that the Committee expects all the nineteen councils to be represented by their sectoral heads of MDAs with their status reports on various work activities as well as programmes for the year 2015.

According to Hon. Koroma, Section 93 Sub-Sections (111), (112) and (116) of the 1991 Constitution mandate lawmakers to investigate, enquire on monies received for and on behalf of the people of Sierra Leone if they are not properly utilized for their intended purposes.

The Chairman further requested to furnish the Committee with additional supporting documents in order for colleagues to efficiently and effectively do their work, including bank statement of account, bank balance supporting documents, certificate of awarding contracts, and percentage of job completion statement of account from home source revenue generation and other sources.

Hon. Koroma stressed that the Committee will focus on key elements to ascertain their investigation of embezzlement scams from various councils, including other sources of revenue generation from donor partners both internally and externally, certificate of contracts as well as comprehensive supporting documents.

He however assured representatives from the councils that as Members of Parliament, they were not in any way trying to intimidate anyone, but to ensure proper things are put in place for national development.

Several contributions were made by other Committee members to create more significant impacts on the nineteen councils’ contributions to national development, including Hon. Habib Bakarr Munda, Hon. Jusufu B. Mansaray, Hon. Kombor Kamara and many others.

The summoning of the nineteen local councils attracted all the Chief Administrators.

Amongst all the nineteen Chairpersons and Mayors, only the Chairman Sadiq Sillah of the Pujehun District Council appeared before the Committee to convincingly defend his council.