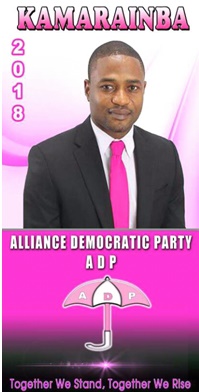 Asst. Insp. Gen. of Police Karrow Kamara confirmed that the ADP leader and presidential candidate was arrested in Freetown “in my presence” and was being taken to Daru in the eastern Kailahun District where he would be charged for illegally possessing a firearm.

He said that during a local council by-election on Saturday in the eastern town, Kamarainba “was intercepted with a high voltage stun gun”.

Asked why he was not arrested on the spot of the alleged seizure, the police commander said they were still investigating the matter which he said had now been completed.

Kamarainba has allegedly told a reporter that his arrest is politically motivated, while many Sierra Leoneans who have been observing the activities of the contentious politician have said on social media that if it was indeed proved beyond a reasonable doubt that Kamarainba had an illegal weapon he should be fully prosecuted as a deterrent to other politicians, especially during this period as the country’s electioneering process is  fast approaching.

Kamarainba’s Alliance Democratic Party (ADP) taking as many as 341 votes that sum up to 13 % of the total votes casted, at the just concluded Kailahun SEGBWEMA Ward 025 bye-election.

In news release, released by the ADP described the arrest of their Presidential Candidate as unlawful as they claimed it was done based on order from above.

At this juncture, the ADP is strongly demanding the unconditional release of its Presidential Candidate Mohamed Kamarainba Mansaray whilst calling on all opposition political leaders, international community, civil society groups and members of the Fourth Estate to hold accountable President Koroma and the APC for the LIFE of Mohamed Kamarainba Mansaray, “the press release as quoted.

Kamarainba was a member of the ruling APC party until he controversially fell out with them. He later established his party which many see as a thorn on the side of the establishment.