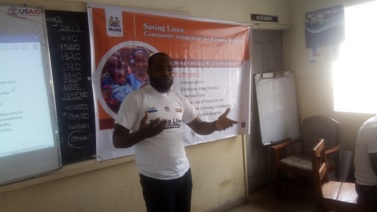 Giving the objectives of the project, Lead Facilitator of the community engagement workshop who also doubled as the Web and Data Manager of Focus 1000 Sallieu Sesay, stated that the primary focus of the project was to strengthen and establish “Kombra Network” at district, chiefdom, village and section levels. He went on to say that, they would empower the “Kombra Networks” with the necessary information and evidence about community health needs and the health system. He furthered that they would be providing the timely and accurate information to the various ‘Kombra Networks’ across the country that would make them strong enough to engage health planners at district levels. He said that, the project would also focus on strengthen linkages with civil societies so that they would all have the opportunity to sit together and discuss health related issues.

Addressing all on the need to donate blood in order to save lives, the National Safe Blood Services Program Manager Dr. Mercella Coker began by telling all that Sierra Leoneans should develop the habit of donating free blood to our hospitals in order to help reduce the rate at which our mothers and children are dying in the country. She went on to say that blood is not for sale anywhere in the world and therefore discouraged those who were in the habit of selling or donating blood for money to stop with immediate effect. She called on all to immediately report anyone caught selling blood as it is a very serious criminal offence. She ended by calling on all to help in encouraging their community members to voluntarily come out and donate blood so as to help save lives in the country.

In his statement, the Chairman of the Health Committee at the Freetown City Council, Councilor Mohamed S. Turay of Ward 357 told all that they as a council are always ready to give support to any organization that works towards development in the country. He went on to say that, Focus 1000 is one of the leading organizations in terms of the fight against reducing maternal and child death in the country.  He promised his council’s commitment to the fight against maternal and child death in the country.