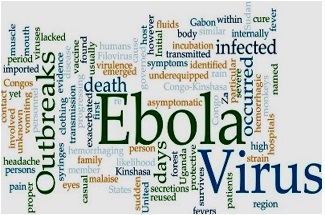 Bro. Michael M Koroma is the Chief Executive Officer at the St. John of God Hospital and has been in the thick of it all. He told the visiting delegation that Mabessaneh had been a reliable referral Hospital for several decades as a result of which the first confirmed Ebola case recorded in the district went through it. He described the outbreak as a very sad and scaring experience for the hospital which was in the midst of people dying of the virus including his own staff and workers.

The Chief Executive Officer explained how his management had to request for help from his superiors whose timely response enabled them to intervene with the provision of food to quarantined families, monitored, counselled and sensitised communities. He said his management also liaised with both the Port Loko District Health Management Team and the District Ebola Response Centre to evacuate very sick people to Holding Centres and provided basic malaria treatment to inmates in quarantined homes.

Bro. Michael M Koroma explained how they ended up providing structures as Community Care Centres for sick people found around the community when the situation became very serious. He said they resolved to reopen the Hospital following the downward trend of the virus after a series of trainings on Infection Prevention and Control. He said this was done with support from the Sierra Leone Government, the Italian Government, IOM, WHO, and CHASL. He said logistical support was made possible with help from the Health Ministry, St John of God Brothers in Rome and Spain, Brothers of St. John of God in Rome and Juan Ciudad Spain, Friends of Italy who supported Bishop Natalio of the Dioceses of Makeni as well as private partners from Spain ,Ireland, UK and USA.

Dilating on the current situation, the Chief Executive Officer said they were now providing general medical services with a special focus on mothers and the new born together with the adolescence. He said they have since serviced over 8000 patients at the out- patients department and over 1, 200 people have also been admitted, treated and discharged from the hospital. Bro. Michael M Koroma further spoke of the Safe Motherhood Promotion Programme which aims at providing pertinent information to Child Bearing Age and Pregnant Women together with the detection of High Risk Women with Pregnancies so that they can be referred for further management. He informed the Team that the programme has already commenced under the leadership of Madam Isha Daramy Kabia- a retired Midwifery Consultant.

The Delegation of the European Members of Parliament, which included Hon. Beatriz Becerra, Hon. Ignazio Corrao and Hon. Adam Szejnfeld,   was led by Hon. Norbert Neuser. He noted that the country has made some remarkable progress judging from the statistics outlined by the Chief Executive Officer of the St. John of God Hospital.

The E U Member of Parliament was however quick in noting that the Health Sector in the country is not strong enough and therefore requires improvement. He said that was the basis for the E U support to the Government of Sierra Leone regarding implementation of the Post Ebola Recovery Plan.

The E U Member of Parliament said there is great need for the Faith- based and Government institutions to work together in the implementation of the Post Ebola Recovery programme.

In his remarks, Hon. Peter Versteeg realised that maternal and new born are yet a critical issue to be addressed.   He said they were therefore working with UNICEF in a view to have it addressed. This was buttressed by Hon. Beatriz Becerra who noted that the efforts of the Management of the St John of God Hospital were so impressive that the lessons learnt from the untiring efforts of its staff and workers during this crisis will help to convince their people in the E U to support the Post Ebola Recovery Programme in Sierra Leone