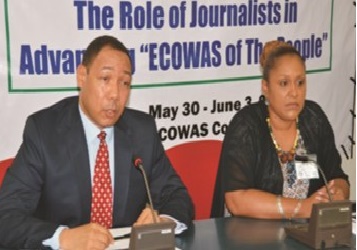 Welcoming journalists from the West African region to the program on behalf of His Excellency Marcel Alain de Souza, the President of the ECOWAS Commission, the ECOWAS Director of Communication Mrs. Sandra Oulate Fattoh Elleingand stressed the imperativeness of having a crop of better informed journalists about ECOWAS and its institution towards the envisaged greater integration of the area, with an ECOWAS of the people in sight by 2020
Speaking on ‘The Role of Communication Directorate in Creating Awareness Amongst the Citizens of The ECOWAS Community,’ Mrs. Fattoh Elleigand said the Abuja training program presents an ample opportunity to discuss mutual interest of the practitioners, ECOWAS Commission and the people of West Africa in general.
She said that it is gratifying that the agenda covers a wide range of interesting items having to do with the operations and programmes of ECOWAS and as they relate to the specific needs of the people of the region.
FES Nigeria, Resident Representative, Madam Seija Sturies maintained that the FES which has been involved in the development process in Nigeria since 1976, is now actively engaged in the promotion of participatory democracy. The focus she said, has become necessary because “without information this will just be a façade”
Madam Sturies further disclosed that the collaboration with ECOWAS also stems from the fact that FES is a German organization that is committed to the values of social democracy and is collaborating in Nigeria with different stakeholders such as human rights and civil society organizations, the Parliament, as well as Trade Unions.
The citizens of West Africa, she continued, deserve to know about the policies and programmes of those that are at the helm of affairs just as they deserve to contribute if need be to the decisions that directly affect them “and the onus is on the media to bring information to citizens.”
Making reference to several ECOWAS integration programmes and provisions such as the one on Free Movement of Goods, Persons and Services, she noted that it has become necessary to find out how many traders in the region are aware of the provisions as they operate across the border whereas, making such information available at the community level can help change some of the practices, and then facilitates and accelerate regional integration and development.
The Vice President of the ECOWAS Commission, His Excellency, Edward Singhatey charged journalists from across the West African region to be conscious of the link between stability, economic development and integration as they carry out their role of adequately reporting ECOWAS news and events in the region.
He urged the journalists on the need to be alive to trans-national issues of the co-existence of states, also charged them to be more forceful in the reportage of the integration agenda of the regional organization.
Intimating the journalists with some of the strides made by ECOWAS even as the organization is on the verge of rolling out more programmes geared towards effective integration, he cited the ECOWAS biometric card system, trans-national road and rail infrastructure, trade liberalization and greater cooperation and understanding among contiguous states as some of examples in this regard.