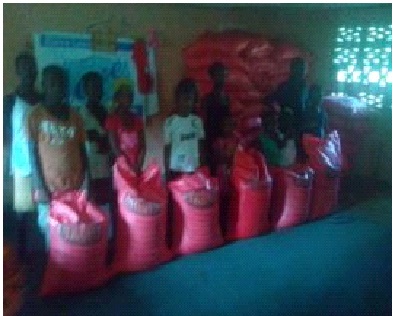 In the aftermath of this deadly outbreak, it now seems that most of the Ebola survivors, especially the orphans are left to fend for themselves, as such concern was recently raised in Grafton.
As the second phase of the outbreak (post Ebola recovery) progresses, Dr. Christian Bell, a renowned medical doctor of Love-One-Another Campaign, has called on the Government of Sierra Leone and non-governmental organizations (NGOs) to strengthen the fight against the deadly virus and continue to provide adequate support for Ebola orphans in the country.
Dr. Bell made this statement during his address to over hundred Ebola orphans and their care-givers at the Grafton community in the Western Area Rural, where he donated over seventy (70) bags of rice and cooking oil worth millions of Leones as part of his organization’s support to Ebola worst-hit and deprived communities in the country.
He said his organization has been providing social services to different communities after the outbreak with food items and school materials to Ebola orphans but however stated that their main priority for now is the Grafton community because of their deplorable conditions, noting that most of the people there live in abject poverty.
“My organization will continue to support Grafton Ebola orphans because we noticed that most of the caregivers are poor and have their own families to look after, therefore it is an added baggage to your responsibilities and I salute your courage,” he maintained.
He informed them that apart from providing food and school items, his organization is working with community elders to secure a piece of land to construct a recreational centre such as library, medical clinic and a playground as a means to engage the children for developmental purpose.
Receiving the items on behalf of the orphan children, Isata Kamara expressed her gratitude to Dr. Bell for his generosity towards their community, stressing that it is only Love-One-Another-Campaign that has come to their aid at Grafton, pointing out that their community is in dire need of assistance especially the orphans.
One of the caregivers of ten year old Mary French explained that it a difficult challenge for them because their basic earnings cannot provide for their families let alone an added responsibility but she said “we cannot abandon the children now despite the difficulties and we are calling on other organizations to follow the example of Love-One-Another Campaign”.
She promised to use the food items judiciously and will ensure the orphans are well taken care of.