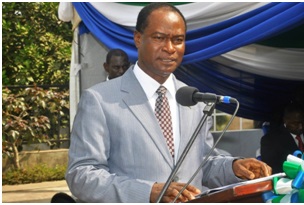 Going further, Snoop De Political also interpreted the traders’ slogan as to mean: “Dr. Samura is a virgin who is yet to steal from the country’s coffers”. This according to him could also mean: “Dr. Samura is yet to be crucified by the media, critical minded political analysts and civil societies among others from whom most of those other politicians disappointed by President Koroma at the just concluded Makeni convention.

To many other Sierra Leoneans who saw and heard the traders yesterday, the meaning of the traders’ slogan has diverse meanings that could only be understood and well interpreted by the traders themselves who crafted the song.

Marie Sesay commonly known as Marie APC, who was part of the jubilating traders yesterday spoke to AYV and attempted to interpret the slogan.

She said the slogan: “Dr. Samura nar virgin,” was crafted by them to respond to the campaign slogan of opposition supporters’ slogan: “You sabi am?”

To many, new political slogans for the 2018 elections might just be: “You sabi am? Dr. Samura nar virgin”.