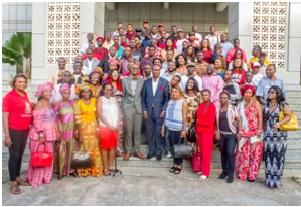 A high-powered delegation from the Diaspora led by Lawyer Abess Kamara on Friday 20th October, 2017 revealed that they in the Diaspora are happy and willing to give their unreserved support to Dr. Samura.

This according to him is based on the fact that Dr. Samura is one of the few politicians in Sierra Leone with very clean political and otherwise records, backed up with a resounding international standing which makes him very much easier to market than other candidates in the opposition.

“As Diasporans, what we need is quality and unblemished representative to represent Sierra Leone on international Fora.” Abess stated.

In his response the APC Presidential Candidate

Dr. Samura Kamara thanked the Diaspora Community for the support and confidence they bestowed on him.

He called on them to always stand by the APC party for the development of Sierra Leone, while assuring them of his willingness to ensure that Sierra Leone continue with the  development program of  President Dr. Ernest Bai Koroma.