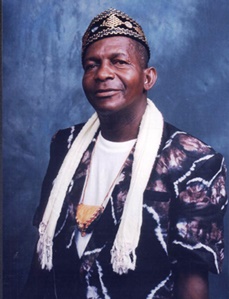 He played an innovative and infectious trademark brand of Palm Wine music, known as Milo Jazz, a hot jumpy version of Gumbay Music. Milo Jazz music originated from collecting empty Milo malt drink cans, and filling them with stones. Friction between the cans or empty bottles produced mesmerizing, soulful percussion music. This hallmarked the genesis of a novel kind of street music that modernized the existing Gumbay or Maringa brand of music.

Dr. Oloh probably got his tutelage from the famous king of Gumbay and Maringa music Ebenezer Calendar who was the son of a Barbadorian soldier who had introduced street music in Sierra Leone. Dr. Oloh had admired the master musician – Dr. Dynamite (Masokoloko) during his guitar playing sessions but Dr. Oloh was more determined than ever to introduce his own brand of music. The West Indies was the Mecca of calypso, Maringa or Gumbay music.

Light, playful, ingenious music could have originated from the Kru, or Creole seafaring, guitar-plucking Africans from Sierra Leone and Liberia. Termination of the Atlantic Slave trade brought freed slaves from Jamaica to settle in Freetown while American freed slaves found a sanctuary in Liberia. Slaves from these regions brought with them their dialects, music and culture. Music is a universal language that transcends geographic or linguistic boundaries, and could be as entertaining as it’s therapeutic.

Mr. Cole’s contagious music swept through the capital city Freetown, from the 60s onto the 90s. Civil war broke out in Sierra Leone and devastated his massive audience and livelihood.

His Milo jazz band constituted tempo bass drum, mouth organ or harmonica, bass drum, triangles, tenor drum, cans, and bottles. He was the lead vocalist in the band, backed by male voices. His lyrics were bold and fearless, sometimes as vulgar as they were sensuous, while he addressed the issues of street life, sexual attraction, marriage and political issues that ordinary people experience daily.

But he hated war and even became an activist against violence, dictatorship or anarchy. Sometimes he found himself on the dreadful path of a power conscious machine. He was an advocate for peace, unity and happiness. His lyrics are more intuitive than they are cerebral, and generously flavored with brilliant aesthetics and strong cultural imagery.

During the transfer of power from the late Siaka Stevens to J.S. Momoh, he composed one of his most famous songs: ‘Momoh nor worry’:

Sierra Leoneans were uneasy about the blatant and unethical transfer of power from a retiring head of state to a loyal soldier. Momoh seemed as pretentious as he was naïve. Dr. Oloh’s composition was an affirmation that Momoh’s acquisition of power was through divine providence.

No stage was big enough for Mr. Cole. He performed at moonlight picnics, carnivals or marriages. He had the ideal catchy songs for every occasion. During the festive seasons especially at Christmas, his services were in high demand for moonlight picnics. He would divide his group into two wings to make sure that every engagement was covered. His absence could have easily ruined an anxiously anticipated festival.

He believed in the sacredness of leadership. And for him high authority came from God. Other cultural musicians like S.E. Rogers, Ebenezer Calendar and Salia were not immune to singing the praises of leaders they admired. S.E. Rogers was famous for his Song ‘My Lovely Elizabeth’- dedicated to Queen Elizabeth of Great Britain.

Dr. Oloh had the ingenuity to surprise and to thrill his audience, by switching from one lyric to another. This earned him applause and sometimes cash donations. He loved to see his audience fall into a frenzy of ecstasy. His music was like a long playing medley album. If Milo Jazz music was his pulpit, the lyrics were his gospel. Other popular songs include Hallelujah Tumbay, Yawoh Mammy and Ajubah.

In 1989 he was awarded the Order of the Rokel (OR) by the late President Joseph Saidu Momoh for his contribution to the cultural music of Sierra Leone. He had an impressive resume. In 1991 his group performed in England at the Ball Rooms in Leicester Square, London. And in 1992 he toured the United Kingdom. In 1994 he performed with other Sierra Leonean musicians, at a benefit concert for the late S.E. Rogers. His final international engagement was in 1996, when he performed in London at the Centenary celebration of one of Sierra Leone’s heroes – Bai Bureh.

His home coming call came October 13, 2007. Although he never had a deep pocket like most famous artists, his passion for music ran deep within his veins and arteries.

He blazed like the Harmattan dry wind fire throughout the world, serving as link to a chain that helped unite people or promote the destiny of the human race. His music has influenced a budding new crop of musicians like Emmerson Bockarie, famous for his hit song ‘Borbor Belleh.’

Emerson’s lyrical music is as bold as it is fearless, which assaults the conscience of politicians, at the same time addressing the ills of society. Dr. Oloh’s legacy will bloom like water lilies on the river banks throughout timeless ages.

Indeed he was Sierra Leone’s gift, who kept on giving. To borrow a chord from the harp of the articulate Southern American poet Willie James King, “I made music. And the music made me.” Willie’s diction cannot be an overstatement.