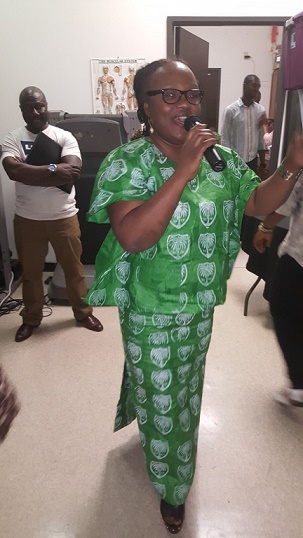 Past leaders, including Yayah Bio and Kadie Tejan-Sie, and many other people with credentials witnessed the swearing ceremony. Jestina Momoh, the vice chair for the past regime, on behalf of the chairman, Donald Korpoi did the handing over ceremony.

The executive of the new administration comprise ten positions.  The ten man executive mostly young people took an oath of office before a renowned SLPP lawyer, Andrew Jaiah Kaikai Esq. The shifting balance of power in the SLPP Dallas chapter gave greater political weight to the taking of oaths, and developments when young generation continuing to surface in politics.

The captain for the next two year voyage to sail in Sierra Leone was Doris Bangura-Bright (Chairman). The Vice Chairman is Sahr Mbayo. Bryma Samba clinched the Secretary General Position; the man who keeps the money happened to be Gasper Tejan. The Financial Secretary is Joe Pokawa, while the Women’s Leader is Princess Mustapha, and the Public Relations Office PRO, for the second term won by Sorie Tejan.  The Young Generation Leader was secured by Daniel McCarthy; finally, Junior Kemoh also secured the Organizing Secretary position.

In her brief speech, Doris Bright urged for the unity in the chapter as well as the entire SLPP party. She said that peace and unity happened to be the only pathway to victory in the forthcoming 2018 presidential and parliamentary elections. Bright reiterated that in her tenure, the Dallas chapter would never be one sided or partially favored any presidential aspirants in their party.

“We are looking forward to render our overwhelming support to the flagbearer the party will eventually choose and present to us, Members have the right to exercise their democratic freedom to push their case for their respective candidates of their choice, but the chapter in its entity has no candidate” she added.

The new Chairlady reaffirmed her chapter’s commitment to play a pivotal role in order to work together with SLPP-NA branch, to facilitate that SLPP emerge victorious in the forthcoming elections. As a healthcare professional with an enormously broad-minded and broad-reaching approach to people, Doris Bangura-Bright assured her member that her administration will hoist the SLPP-Dallas chapter into a higher height, she promised.

Doris Bangura-Bright is a Registered Nurse who holds a Bachelors of Nursing Degree (BSN) and currently working on her Masters in Nursing as a Family Nurse Practitioner (FNP). Among opinions expressed about Bangura-Bright, were that she happened to be a hardworking woman and a mother to the chapter who strongly support the members and activities of the chapter at every level.

The Sierra Leone People’s Party (SLPP) Dallas chapter in North America had pledged to help and uphold the current level of peace in the party and support the preservation of unity, so that the party will eventually secure the country’s governance process, in the looming elections.

The elections commissioners, in their speeches emphasized unity in the party and that Dallas chapter had set the pace for an overall commitment by the entire party members, to maintain peace and unity in the party. According to Solomon Pieh, the founder of the chapter, peace explore ways of achieving national cohesion among the ethnically and regional diverse lines to achieve the party cohesive goal.

Meanwhile, the Chairlady and her Executive in collaboration with the SLPP-NA would be working on a suitable date for their inauguration wherein the Dallas Chapter Executive will be taking another oath office before the leadership of SLPP-NA to mark the commencement of a two-year term.