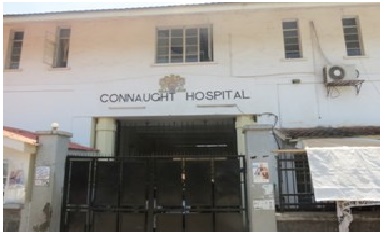 Dr Pisani made this clear to AYV in a calm but confident mood as he explained the work of his organisation as well as his experiences in various parts of the world, noting that Doctors with Africa operate in 41 countries and support 217 hospitals in various health care support with special focus on maternal and child health, which preventable diseases as key.
Dr Pisani, since his arrival in Sierra Leone, has worked in Kenema, but is based in Pujehun Government Hospital together with other colleagues, working in various communities in the district.
He explained that to work in rural communities where literacy level is low is difficult, but with commitment and humility a lot can be achieved, because language has no borders and this has helped him with his work, saving lives and at the same time making new friends wherever he went.
Questioned on how Doctors with Africa operates, the Bush Doctor revealed that the organisation is a non- governmental charity with over sixty years humanitarian service, conducting long term health projects from a development and cooperation perspective to ensure improved access to health services for all, which is a universal right.
He recalled that sometimes it could be frustrating in the line of duty trying to save lives due to inadequate resources; this is why cooperation is important between the health administration, the community and Doctors with Africa.
“When we arrived in Pujehun there was only one ambulance, but with collaboration the hospital now has five ambulances, including additional infrastructure and beds for the hospital”.
Dr Pisani commended Government, UNICEF and other partners including Pujehun residents for improved support, which gave the motivation to save more women from dying during child births as well as under-fives from preventable deaths.
He said during the ebola outbreak when most people lost confidence in the health sector, Pujehun hospital had more deliveries and mothers coming in with their young ones for routine vaccination.
Dr Pisani noted that Doctors with Africa believes that giving birth to a child, even in the deepest rural parts, often demands more than a simple act of love, but requires the appropriate means, tools and the commitment of all to save a woman and any other person from dying.