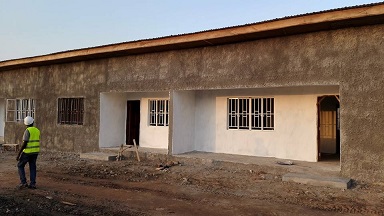 They said that the houses should have been completed long ago as the targeted period was 45 days, but the intervention of the 3 bosses, Alimu Barrie of Pavifort, Mohamed Gento Kamara of Gento Group and Papa Chendeka of Secon, saw the addition of other structures to house orphans and the provision of several other facilities as necessary. They disclosed that the 52 houses are 98% completed and against the end of this month they will be handed over to the government. Each house will house a whole family. They will be provided with solar electricity and water. Their bosses then instructed them to build a church and a mosque for the people and a recreation ground for football. There is also a security post to provide security for the residents. They disclosed that they were faced with challenges during their work, the most pressing being the weather. This prevented vehicles from transporting building materials into the site and these were then transported by the machines. Many blocks built were destroyed by the rain. They explained that to meet the dead line of 45 days, they worked most times, for 20 hours a day with the help of huge security lights.

During the tour of the houses this writer discovered that they were paved and hard boards erected on the ceilings. They also explained that the orphanage will house 12 households of 8-10 children each. This orphanage is for those who had lost their parents in the disaster. The orphanage is made up of 3 blocks. They stressed that other facilities may be added as time goes on.